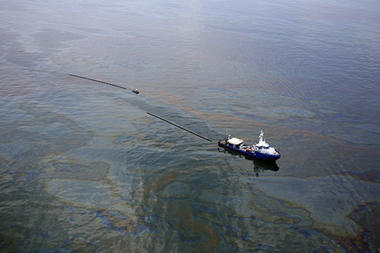 What We Sow We Reap

To be sure, the amount of oil spilled into the Gulf is immense.  To say that the well leaked is a disservice; it veritably gushed.  Gushed to the tune of 62,000 barrels a day slowing to 53,000 a day as the oil in the reservoir diminished the internal pressure.

And we covered it.  Boy did we cover it.

END_OF_DOCUMENT_TOKEN_TO_BE_REPLACED

I, for one, am happy that BP put aside $20 billion into an escrow account.  I’m afraid that they’ll file for bankruptcy and we’ll lose any ability to get them to pay for anything.

Michelle Bachmann isn’t so happy with that turn of events:

The president just called for creating a fund that would be administered by outsiders, which would be more of a redistribution-of-wealth fund.

END_OF_DOCUMENT_TOKEN_TO_BE_REPLACED

How in the world can you say you are managing this thing if THIS is true?

Oil in the Water: Drilling for Oil

So, who woulda thought that oil would naturally seep into the ocean?

Not me.  Ever.  For some reason I always thought that oil was deep underground and very hard to get at.  Turns out that oil really does seep into the oceans naturally.  And, by humans drilling for off shore oil we actually prevent much of that oil from entering the water.

END_OF_DOCUMENT_TOKEN_TO_BE_REPLACED

Well, until the last 14 words.

Then ya lost me.

END_OF_DOCUMENT_TOKEN_TO_BE_REPLACED

Actually, what I like to say is that I like being “Left” in a “Right” world.   That is, I enjoy the fact that there are armies of men and women out there who work their asses off so that our nation and world can be what it is.  Yet I also enjoy playing the role of individual freedom spoiler in my little life.

I like fighting for the little guy.  I like pullin’ for the underdog.  I want the immigrant to hit the big time.  And I want the oppressed to rise up…if only to become part of the machine.

END_OF_DOCUMENT_TOKEN_TO_BE_REPLACED

As I’ve said before, I know a little something about managing a “break/fix” situation.  And from where I’m sittin’ BP ain’t doin’ a very good job.

Now I’m not plugged into the information like I would be if this occurred on my watch at work, but there seem to be key components missing in this effort.

I’m not getting the feeling that information is being communicated effectively.  For example, we still don’t know how much oil is entering the gulf each day, in short, we don’t know how big or small the leak is.  Unacceptable.

Next, it feels that we’re working in serial.  We have one solution that is dreamed up, prepped, deployed and then monitored.  When that doesn’t work, we go back to the beginning and start over.  Fresh.