Put Bicycle Riders In Their Place 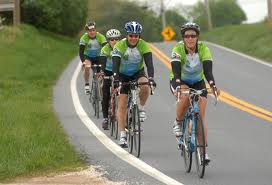 I live outside of the city of Raleigh.  The roads of Wake County are two things:

Really, driving through the county on those little county roads is a good way to spend a couple hours.  When the kids were very young I’d get them to nap by driving through the roads near my home.  However, those roads offer little to nothing in the way of a shoulder.  Even the picture above has very little shoulder support, and the roads near my house offer even less.

Which is why I advocate that bikes should not be on these roads.  Fifty or seventy years ago these roads were lazy country affairs.  Today, with the population growth, these roads are legit thoroughfares that move 1000’s of people to and from work every day.  Complete with the hustle and bustle of such.  Drivers are hitting speeds of 50-60 MPH and that just doesn’t work when you have a cyclist, or 5, moving at 20 with no way to get out of the way.

While I don’t think that bikes have a place on these roads, I DO like this idea:

Every day, one-third of the people of Copenhagen ride their bikes to work or school. Collectively, they cycle more than 750,000 miles daily, enough to make it to the moon and back. And city officials want even more people to commute, and over longer distances.

So a network of 26 new bike routes, dubbed “the cycling superhighway,” is being built to link the surrounding suburbs to Copenhagen.

Lars Gaardhoj, an official with the Copenhagen capital region, says the routes will be straight and direct.

“It will be very fast for people who use their bike,” he says. “This is new because traditionally cycle paths have been placed where there is space for them and the cars didn’t run. So now the bike is going to challenge the car.”

The first highway, to the busy suburb of Albertslund some 10 miles outside the city, was completed in April.

Each mile of bike highway will cost about $1 million. The project is to be financed by the city of Copenhagen and 21 local governments. And in a country where both right- and left-leaning politicians regularly ride bikes to work, it has bilateral support.

Even as I object to cyclists on our roads I preach that we should build a “bike-way” through the county.  Start with a small map and add 5 feet to one side or the other of our roads; a place where only bikes can go.  But creating a highway might even be better.

Certainly government has a role in transportation.  And we can pay for it by implementing a use tax.  You can tax bicycles, something I had to pay every year growing up in Minnesota, or pay a toll as you ride the highway.

I Suspect This Won’t Work Either

The idea is a good one, and noble too.

It’s been tried before.  And it’s failed before.

The idea, of course, is to make available a large number of bikes to the public so that they can:

END_OF_DOCUMENT_TOKEN_TO_BE_REPLACED

A Lot Different Than Motorcycles

I live out in the county of Wake county.  There are a lot of old windy country roads.  Many of them are heavily wooded and would cause a person to think, “I would LOVE to ride bike through these roads”.  But the fact remains that these roads are barely, BARELY, two lane roads.  There is NO shoulder to speak of; the white line delineating the edge of the lane to the right side almost all of the time has 2-4 inches before giving way to grass, rocks or a ditch.  And we constantly have bikers riding these roads.

These raos are roads where cars are moving at speeds of 45-65 miles per hour.  Sure, most of that is speeding, but even at 45 MPH, the bike has no chance when facing a car.  Further, these bikers don’t just ride single file and give way to traffic, they often ride in groups; small or large.  Each of which presents it’s own problems.

I really don’t think that the roads here in Wake county are meant for bike riders.  There is not enough room on the side of the road and the speeds these guys are carrying is just too dangerous.  Both for the car traffic and for the bikers.

Which is why this comment reported on by the News and Observer makes me upset:

“…the N.C. Coalition for Bicycle Driving, an organization that works to educate bikers on safe ways to ride, while emphasizing that bicycles have as much right to the roadways as cars do. People often forget the high speeds that bicycles can go, Pein said.

“We’re essentially motorcyclists with an organic engine,” he said.”

No.  No they are not.  Motorcycles are capable of full speed.  They are able to keep up with traffic and not force it to change speeds.  Further, motorcycles are required to carry insurance.  Last, motorcycles have licenses, inspections and purchase gas; all of which entitles them to the use of roadways.  Bicycles have none of these.  Simply put, bicycles on roadways are “unsafe at any speed”.