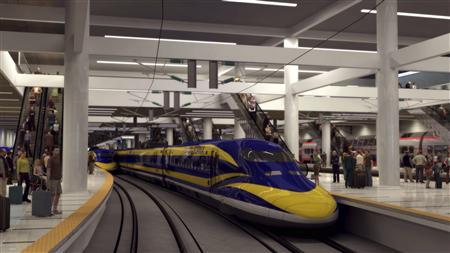 The California senate voted on Friday to begin work on a bullet train:

(Reuters) – California lawmakers gave a nod of approval to a high-speed rail plan on Friday in a make-or-break vote for $8 billion in funding to start construction on a 130-mile section of track through the state’s central agricultural heartland.

I have to admit that I’m thoroughly perplexed by the fascination with mass transit in general and high speed rail in particular.  I don’t understand the whole religion surrounding this thing.

Now, don’t get me wrong.  Railroads, in their time, helped to build this country.  They greatly reduced the time it took to get from one place to another and brought prosperity where ever they were built.  My little town in Minnesota was a railroad town.  Further, I love trains.  I love watching ’em, I love pictures of ’em and I love going to see train museums.

However, I don’t think that this is a love of trains that’s driving this.  I think it’s a combination of a couple of things:

Now, don’t get me wrong.  I love efficiency.  I would be very much in favor of supporting an infrastructure that was able to move more people in less time for less money.  And if we can do that, I think that we should.  Additionally, I resonate with the “efficiency” claims of the “Green Movement.”

In short, if we are, really, able to create a transportation model that gets people from here to there better than what we have now, and that includes cost, you have my vote.

So here’s the question:

How expensive would a train system have to be in order for the most liberal supporter say, “It’s just not worth it.”