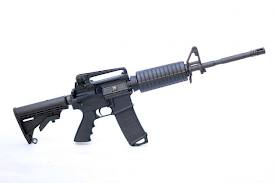 On Tuesday President Obama will receive a report from Joe Biden on gun violence and how to address it.  I admit that I’m torn on the whole issue.  Personally, I don’t care for guns at all.  I played with BB guns as a kid, to be sure, but that’s where it stopped.  I held my brother’s .22 and 16 gauge, but never owned my own weapon.  I once shot a friend’s hand gun, but didn’t like it.

I know that lot’s of people own guns to protect themselves.  Many more own guns because they like to collect them.  And even more because they life to hunt.  And I’m all good with that.  But I don’t want’em in my house.  I have young kids and believe the stats that say a gun owner’s family is more likely to be harmed by their own gun than that gun will be used in self defense.

But I feel its very important to defend the rights of those that DO wanna keep a gun.  I think that if an individual feels that, in balance, the risk of owning gun isn’t greater than the benefit provided by that gun, he should have the ability to purchase and keep that weapon.  He should be able to buy and use ammunition.

In short, a man has a right to buy guns.  And when I say guns, I mean any guns.

Part of the reason that the 2nd Amendment was written and codified was the belief that citizens be able to defend themselves.  From intruders AND their government.  In fact, Jefferson felt that an armed citizenry was a last resort to a tyrannical government.

So, what to be made of the world today?

To those that would ban an assault rifle.  How much less of a tragedy would it be if an armed intruder, carrying a pistol, or 4, would take the lives of, say, 10 children rather than the number taken in Sandy Hook?  How will you be able to stand in front of the parents and claim that it could have been worse?

A life taken too early due to violence is a tragedy.  And whether that life is taken by a hand gun or a rifle is not meaningful.

But the restriction of liberty is.  And THAT is what we need to guard against.

Now, are there things that we can do?  Happily, yes.

I think that we have a good opportunity to increase our background checks.  Both in number and in depth.  I think that we can do more to keep guns out of the hands of criminals and of the mentally unstable.

And technology might be able to help us.  We should consider, at least consider, the technology that allows a gun to be fired based on a fingerprint profile.  Should a private sale occur, the gun could be taken to a dealer to swap that profile.  Have a family of 5?  Submit a profile for 5.

There is a lot of work to be done, to be sure.  But there is a lot of Liberty to be lost as well.  And we must remain ever vigilant that the sacrifices of those who came before us are not lost to fear.

No One Likes To Be Blamed

By Tuesday, if you believe the deadline Biden has for his report, Obama is going to receive a report on how to curb violence.  By the way, wouldn’t it be nice if the President could demand as timely a report on such things as budgets?  Anyway, the report ….

We all have ideas on what we might like to see in the report.  It goes all the way from ban every single gun in America to posting armed guards at every single school.

But I think that reasonable people understand a couple things:

And Hollywood doesn’t wanna hear that their movies cause violent reactions:

Listen, I don’t know if violent movies cause kids to fantasize about violent acts and that those fantasies then are played out.  But I DO know that if Hollywood feels they can wade into matters politic then they are certainly fair game when it comes time to lay blame.