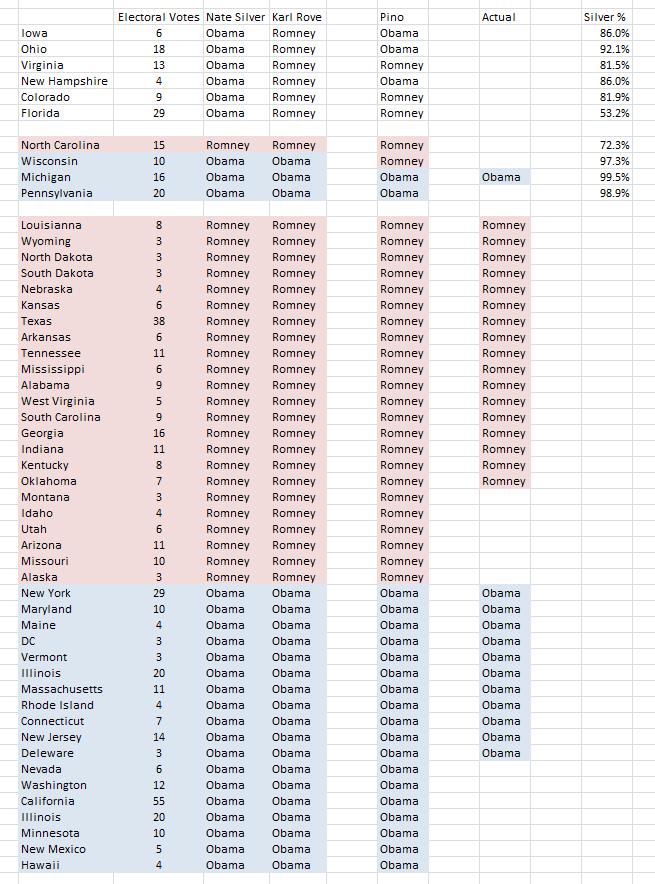 Again, no surprises in the called states yet.

Of note, Michigan goes Obama and Florida and North Carolina are FAR too close for me. 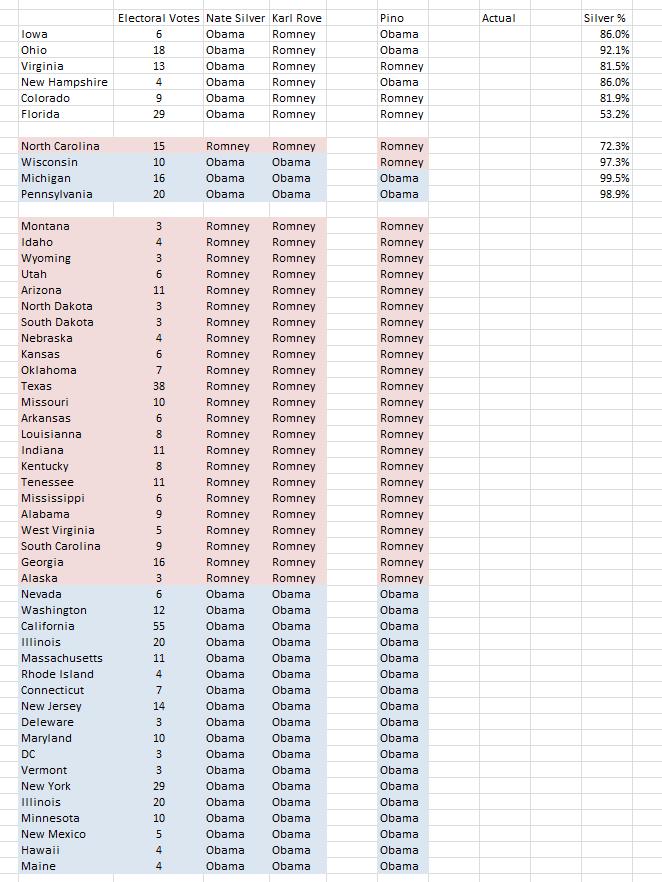 And I love the “Red Necks” that live here: 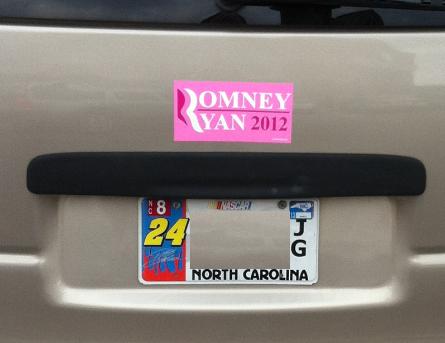 Nothing says “cool” as a pink Romney/Ryan sticker on a mini-van carrying a Jeff Gordon NASCAR license plate.

Turns out the Redskins are a pretty good predictor of things like Presidential Elections:

Romney, who was born in Michigan and was once the governor of Massachusetts, doesn’t have any ties to the Charlotte area. But he’s certainly well aware of the Redskins Rule. Specifically: Going back to 1940, a Redskins victory in their last home game before the election has meant the party currently in power remained in power 17 of 18 times. With a Redskins loss on Sunday to the Panthers, that portends good things for Romney’s political future.

I’ll take everything I can get!

I am voting for Mitt Romney for three reasons.  First, the hidden camera bit where he discussed the “47%” was dead on.  Saying that in private and getting busted for it was wonderful.  He got busted for telling the truth.  I like it when people speak economic truths.  That says a lot about what he understands and where his perspective lies.

Second, much of what he wants to do – economically speaking – is good stuff and he understands the case for building businesses, creating jobs and reducing our debt.  Will he do it?  I sure hope so.

Third – and this is where my fellow Libertarians need to focus – the long-run consequences of four more years of the hope and change wagon rolling over us and the Constitution must end.  Now is no time to stand by our hard-headed, Fed-hating, dope legalizing views and vote for Mr. Paul or Mr. Johnson.

If you Libertarians truly are as smart as you think you are then you will adopt some good old fashioned John Nash game theory and look at a strategy that minimizes the damage of your options rather than trying to maximize the gain from some choice.  This, dear friends is the case…

If Mr. Obama wins, liberty in the long run is in such trouble, and the debt hole, health care hole, tax hole, etc. etc. will be so deep that no future disciple of Ron Paul or Ronald Reagan will be able to pull this fragile republic out of the depths of entrenched Socialism.

Oh Minnesota How I must Weep

So I was researching some stuff for my post on the USS Minnesota when I came across this trivia:

Minnesota has the longest streak of voting for Democratic presidential candidates than any other state in the nation.

And this is during a discussion of who Romney should choose for a running mate.

Minnesota giveth and Minnesota taketh away!