A Leary Eye Towards Government 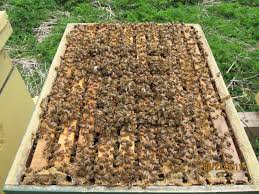 It would be an understatement to say that I oppose the reach of government, but – BUT – when I do support such intervention I support more local solutions than federal ones.  So, if I have to live with the ‘tyranical beast’ at least it can benefit me once in awhile:

Because of housing developments or agriculture as well – clearing out – you don’t have the small fields anymore where you would have buffers of plants,” said Jen Keller, a research specialist in North Carolina State University’s Department of Entomology.

Sen. Andrew Brock R-Davie, said studies show more beehives means better crops, so he has signed on to the so-called Birds and Bees Act, which is scheduled to get its first hearing next Wednesday before the Senate Agriculture, Environment and Natural Resources Committee.

“With agriculture being our No. 1 business, we’ve got to make sure we continue to grow, grow, grow and grow a lot more food for people, not just here in this state but across the world,” Brock said.

His bill would address some of the loss of habitat Keller noted by requiring state agencies to look for ways to increase and promote highway rights-of-way, utility easements and other areas as places for the flowers and trees that bees need for food.

“One thing that we’re trying to promote is to have buffer zones. Let some of those wild flowers and weeds continue to grow,” Keller said.

THAT is an awesome idea.  One  of the reasons that I don’t use my own money to seed county roads where I live is that the county mows the ‘effin roads!

Senate Bill 225 also would prevent cities and counties from enacting ordinances preventing people from having as many as five backyard beehives.

Again – if  I have to live with tyranny, it should benefit me ONCE in awhile 🙂

However, there is one area where I would correct the story:

According to the U.S. Department of Agriculture, bee colonies have dropped 25 to 30 percent per year in recent years. A mix of parasites, pathogens, pesticides and a lack of diversity in pollen or nectar is blamed for much of the losses.

While us keepers suffer colony  losses to that degree, we’ve gotten good at adapting:

But here’s something you probably haven’t heard: There are more honeybee colonies in the United States today than there were when colony collapse disorder began in 2006. In fact, according to data released in March by the Department of Agriculture, U.S. honeybee-colony numbers are now at a 20-year high. And those colonies are producing plenty of honey. U.S. honey production is also at a 10-year high.

This entry was posted in Environment and tagged Honey Bee. Bookmark the permalink.