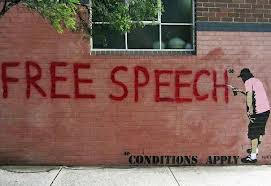 Cleaning out the stack.  This thought courtesy of The Coyote:

So now that the Turkish incumbents have been re-elected, the government will allow Twitter to be turned back on in the country.

I think that the vast, vast majority of Americans would agree that this turning off of a communications vehicle several weeks before an election was a pretty transparent dodge to protect incumbent politicians, and that most of us would oppose such steps — even be outraged by them.

So why the hell was McCain-Feingold‘s ban on 3rd party ad-based communications 60 days prior to an election any different?

I think that a fundamental concept often times forgotten in American politics is that we are free.  We are free.

This entry was posted in Liberty and tagged Free Speech. Bookmark the permalink.