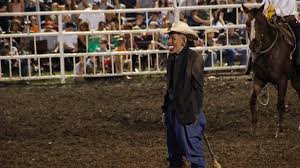 Who is surprised when a man who allows himself to be referred to as “The Barackness Monster” is caricatured as a clown?

The event featured a man wearing an Obama mask with an upside down broomstick attached to his backside who was positioned on the arena’s dirt floor as if he were a dummy. Another clown drew cheers from the audience as he asked if they wanted to see “Obama run down by a bull.”

Clown is as clown does.