Benghazi – Enough To Damage Obama, Keep Hillary Out Of 2016? 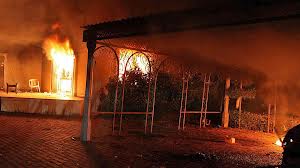 Something Wicked This Way Comes

It’s clear now that the Obama administration misled America regarding the events that transpired that day in September.  There is no longer any doubt:

Mark I. Thompson, the acting deputy assistant for operations in the State Department’s counterterrorism bureau, will testify on Wednesday that then-Secretary of State Hillary Clinton willfully blocked out his department’s involvement on the night of the September 11 Benghazi attacks — and that he has been threatened and intimidated by unnamed State Department officials about saying as much in public, and that al-Qaeda was involved all along. The scoop comes from — where else? — sources close to the congressional investigation speaking to Fox News, two days ahead of testimony by Thompson and two other whistleblower witnesses before Rep. Darrell Issa’s House Oversight and Government Reform Committee. Fox’s sources characterize Thompson has having “concluded on Sept. 11 that Clinton and Kennedy tried to cut the counterterrorism bureau out of the loop as they and other Obama administration officials weighed how to respond to — and characterize — the Benghazi attacks.”

That charge would seem to suggest that the State Department’s actions that night last summer came straight from the top and allegedly without input from Thompson’s Counterterrorism Security Group at Foggy Bottom. As CBS News reports, we know that the Obama administration “did not convene its top interagency counterterrorism resource, the Counterterrorism Security Group.” And since a certain segment of Issa’s Washington is (still) looking back and (still) trying to figure out what went wrong when the American diplomatic mission was attacked, one of the big questions heading into Wednesday’s hearing is whether or not CSG involvement would have made a difference. As The Washington Post‘s Jennifer Rubin insists, the two other witnesses — a regional State Department security officer in Libya and a former department deputy chair of the mission — could send the affair “into a whole different level of scandal.”

Not only did the administration fail to handle the situation appropriately the night of the attacks, they covered up that failure.  Additionally, in order to prevent Obama from being embraced in an election year, they administration attempted, and largely succeeded, in mis-characterizing what happened that night:

After a briefing on Capitol Hill by CIA director David Petraeus, Democrat Dutch Ruppersburger, the ranking member of the House Intelligence Committee, asked the intelligence community for unclassified guidance on what members of Congress could say in their public comments on the attacks. The CIA’s Office of Terrorism Analysis prepared the first draft of a response to the congressman, which was distributed internally for comment at 11:15 a.m. on Friday, September 14 (Version 1 at right). This initial CIA draft included the assertion that the U.S. government “know[s] that Islamic extremists with ties to al Qaeda participated in the attack.” That draft also noted that press reports “linked the attack to Ansar al Sharia. The group has since released a statement that its leadership did not order the attacks, but did not deny that some of its members were involved.” Ansar al Sharia, the CIA draft continued, aims to spread sharia law in Libya and “emphasizes the need for jihad.” The agency draft also raised the prospect that the facilities had been the subject of jihadist surveillance and offered a reminder that in the previous six months there had been “at least five other attacks against foreign interests in Benghazi by unidentified assailants, including the June attack against the British Ambassador’s convoy.”

After the internal distribution, CIA officials amended that draft to include more information about the jihadist threat in both Egypt and Libya. “On 10 September we warned of social media reports calling for a demonstration in front of the [Cairo] Embassy and that jihadists were threatening to break into the Embassy,” the agency had added by late afternoon. And: “The Agency has produced numerous pieces on the threat of extremists linked to al Qaeda in Benghazi and Libya.” But elsewhere, CIA officials pulled back. The reference to “Islamic extremists” no longer specified “Islamic extremists with ties to al Qaeda,” and the initial reference to “attacks” in Benghazi was changed to “demonstrations.”

The talking points were first distributed to officials in the interagency vetting process at 6:52 p.m. on Friday. Less than an hour later, at 7:39 p.m., an individual identified in the House report only as a “senior State Department official” responded to raise “serious concerns” about the draft. That official, whom The Weekly Standard has confirmed was State Department spokesman Victoria Nuland, worried that members of Congress would use the talking points to criticize the State Department for “not paying attention to Agency warnings.”

In an attempt to address those concerns, CIA officials cut all references to Ansar al Sharia and made minor tweaks. But in a follow-up email at 9:24 p.m., Nuland wrote that the problem remained and that her superiors—she did not say which ones—were unhappy. The changes, she wrote, did not “resolve all my issues or those of my building leadership,” and State Department leadership was contacting National Security Council officials directly. Moments later, according to the House report, “White House officials responded by stating that the State Department’s concerns would have to be taken into account.” One official—Ben Rhodes, The Weekly Standard is told, a top adviser to President Obama on national security and foreign policy—further advised the group that the issues would be resolved in a meeting of top administration officials the following morning at the White House.

The only question remaining is how long the administration can contain the damage.

This entry was posted in Politics: National and tagged Barack Obama, Benghazi. Bookmark the permalink.

7 responses to “Benghazi – Enough To Damage Obama, Keep Hillary Out Of 2016?”