In 1948 the Chicago Tribune printed a headline announcing that Dewey had defeated Truman.  History shows, of course, that Truman was victorious.  I resonate with this feeling as we enter the final stretches of the 2012 election.  And to rely even more on historical anecdote, I’ll cal upon the old Nixon rag, “I can’t believe he won.  No one I know voted for him.”

This is where I find myself now.  I’m surrounded by everyone that thinks Obama will win.   But I know only a few people who will vote for him. 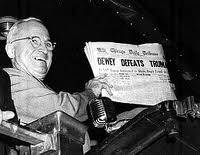 Will Obama Win The Election

Very few people I know are going to vote for Obama.  And this includes a significant number of people who voted for the President last election.

Who Will Win The States

Obviously the election will come down to individual states and who will win the electoral votes.  And that’s where it gets interesting.  National polls showing such and such ahead are fun but in the end, not very useful.  A more accurate view of who is going to win comes down to who wins each state.

And it i s possible to predict who wins each state:

A University of Colorado analysis of state-by-state factors leading to the Electoral College selection of every U.S. president since 1980 forecasts that the 2012 winner will be Mitt Romney.

The key is the economy, say political science professors Kenneth Bickers of CU-Boulder and Michael Berry of CU Denver. Their prediction model stresses economic data from the 50 states and the District of Columbia, including both state and national unemployment figures as well as changes in real per capita income, among other factors.

“Based on our forecasting model, it becomes clear that the president is in electoral trouble,” said Bickers, also director of the CU in DC Internship Program.

Based on the individual state economies, Obama loses to Romney.  Obama isn’t able to overcome the unemployment levels that have dominated the experience of voters in states all over the nation.

Will Obama win?  I continue to think so.  However, “no one I know is going to vote for him.”

This entry was posted in Elections 2012 and tagged Barack Obama, Mitt Romney. Bookmark the permalink.