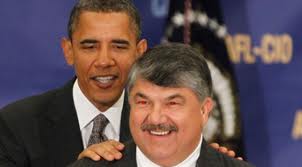 You don’t think that the democrats need the unions?

Organized labor spends about four times as much on politics and lobbying as generally thought, according to a Wall Street Journal analysis, a finding that shines a light on an aspect of labor’s political activity that has often been overlooked.

Previous estimates have focused on labor unions’ filings with federal election officials, which chronicle contributions made directly to federal candidates and union spending in support of candidates for Congress and the White House.

But unions spend far more money on a wider range of political activities, including supporting state and local candidates…

But it isn’t just the money.  It’s not just the influence that money may be able to buy.  It’s the coercion of actual voters:

…and deploying what has long been seen as the unions’ most potent political weapon: persuading members to vote as unions want them to.

And what do unions spend money on?

The costs reported to the Labor Department range from polling fees, to money spent persuading union members to vote a certain way, to bratwursts to feed Wisconsin workers protesting at the state capitol last year. Much of this kind of spending comes not from members’ contributions to a PAC but directly from unions’ dues-funded coffers.

But these costs are certainly reported as political efforts, yes?

There is no requirement that unions report all of this kind of spending to the Federal Election Commission, or FEC.

So, to review, unions are able to use money collected through dues to support the election of politicians who then pass legislation that allows unions to prevent workers from working unless they belong to a union?  And then “due” them to death.

I was in Charlotte when Walker won in Wisconsin.  When he beat the unions.  I was watching Maddow.  She was crestfallen that the democratic party was at the brink.  She pointed out that without the unions, the democrats didn’t have any way to raise money.  She was half right.

Corporations and their employees also tend to spread their donations fairly evenly between the two major parties, unlike unions, which overwhelmingly assist Democrats. In 2008, Democrats received 55% of the $2 billion contributed by corporate PACs and company employees, according to the Center for Responsive Politics. Labor unions were responsible for $75 million in political donations, with 92% going to Democrats.

They still get half the take, they just don’t get ALL the union take.

Let’s hope the gig is up.

This entry was posted in Lobby/PAC, Politics: National and tagged Campiagn DOnations, Unions. Bookmark the permalink.