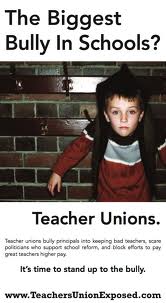 3 responses to “One At A Time: Taking Schools Back From Teacher’s Unions”