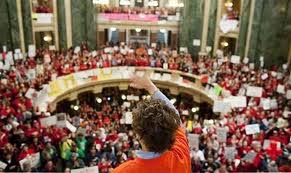 Scott Walker, the governor, pushed legislation through that would limit the ability of public unions to collectively bargain for a portion of their compensation.  The house passed the bill but the democrats in the Wisconsin senate fled the state and moved to Illinois.  There they waited to see what the governor would do.

What he did was strip the bill down to the point where the democrats weren’t needed and passed the bill.  Governor Walker signed the bill into law shortly thereafter.

And what has happened since?

Well, the democrats have successfully called for a recall election AND the state has saved the state more than $1 billion:

BOSTON – Act 10, which institutes reforms in the state’s public sector collective bargaining law, has resulted in savings of between $773 million and almost $1.195 billion to both state and local government.  The savings have spared the Wisconsin economy economic losses it would have sustained had the measure not been adopted.

The law has been a massive success.  The law prevented the loss of between 11,500 and 14,000 jobs.  Disposable income is higher than it otherwise would have been.  In short, the law has been a boon to Wisconsin.

The odds are better than 90% that he’ll win the election.

Let’s hope that he will.