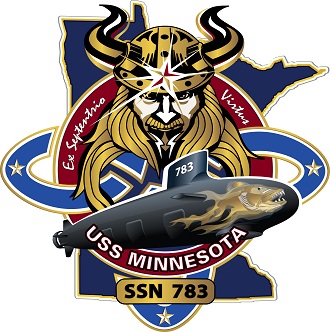 My views on the United States’ military decisions are some of the most dynamic and fluid that I hold.  IN the past I was more anxious to “kick ass and take names” than I am now.  Where before I was in strong agreement that we should “kill the bad guys” I know find myself thinking about what happens if we do.  And, perhaps, how we could accomplish the same thing without killing anybody.

With that said, this is just pure freebased testosterone: 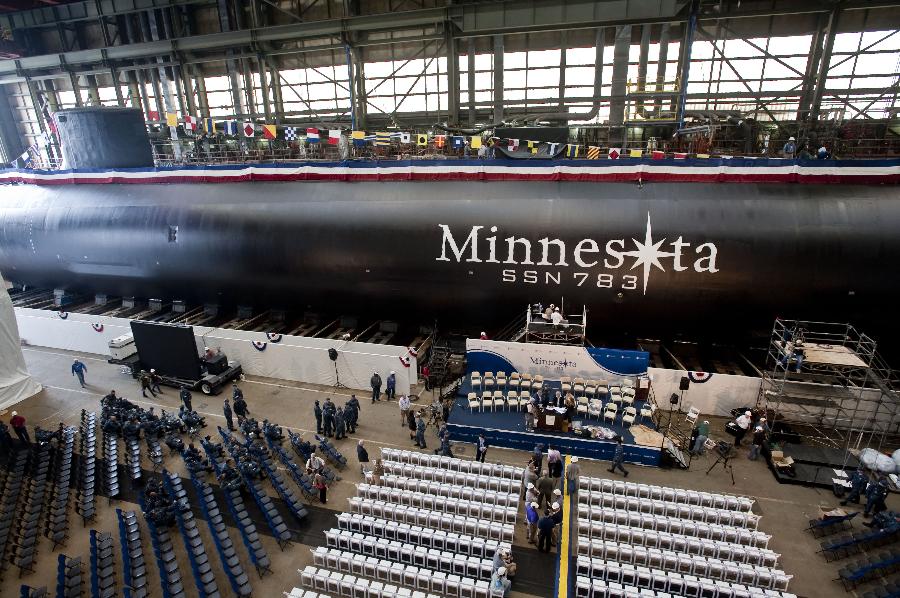 The USS Minnesota, the Navy’s newest attack submarine, will be christened on Saturday in Newport News, Va.

A crew of 134 officers and enlisted personnel will operate the $2 billion, 7,800-ton, 377-foot-long Virginia-class submarine. It is capable of diving deeper than 800 feet and operating at speeds in excess of 25 knots when submerged. The Minnesota is designed with a nuclear reactor that will not require refueling during the planned life of the ship. It is expected to officially become part of the Navy fleet when it is commissioned next summer.

The Minnesota is built to excel in anti-submarine warfare, anti-ship warfare, strike warfare, special operations, surveillance, irregular warfare and mine warfare missions. The Navy said it is capable of operating in both shallow regions and deep waters.

May she carry the Minnesota name into service with equal honor that goes back to the Civil War and Minnesota’s contribution to the Union victory in that conflict:

The story of Col. William Colvill and the First Minnesota Volunteer Infantry is too well known to need extended repetition. When President Lincoln called for volunteers to prevent the dissolution of the Union, this was the first regiment offered. It gave valiant service upon many a resolutely contested field, but its most conspicuous record was made at Gettysburg on the second day of that decisive battle. When the forces under the command of General Sickles advanced into action a little after noon, the First Regiment, of which only eight companies were present, numbering 262 men, took the position they vacated. The overwhelming forces of the Confederates under Longstreet and Hill repulsed and drove back the command of General Sickles and were advancing on the left flank of the Union Army, which was in grave danger of being rolled up in defeat. It was at this juncture that General Hancock ordered this depleted regiment to charge the advancing Confederates.

The gallant First Minnesota, led by Colonel Colvill, at once responded with an impetuosity that broke the first and second line of the enemy and stopped the advance. When the action was over but 47 men of the 262 who began the charge were still in line. The remaining 215 lay dead or wounded on the field. In all the history of warfare this charge has few, if any, equals and no superiors. It was an exhibition of the most exalted heroism against an apparently insuperable antagonist. By holding the Confederate forces in check until other reserves came up, it probably saved the Union Army from defeat. What that defeat would have meant to the North no one can tell. Washington, Philadelphia, New York, and the whole heart of the North would have been open to invasion, and perhaps the Union cause would have been lost. So far as human judgment can determine, Colonel Colvill and those eight companies of the First Minnesota are entitled to rank as the saviors of their country.

Here’s the back story:

After the Confederates had broken through General Sickles’ forward position, General Winfield S. Hancock looked about for a unit to plug a gaping hole in the Federal line before Confederate forces would force itself through to split the Union forces. He later wrote about this moment, “I needed five minutes time” to allow adequate reinforcements to come up.

It would require a full regiment to fill the void, but all Hancock could locate were the 262 Minnesota. He rode up the Minnesotan’s commanding officer, Colonel William Colville, pointed to the Confederates closing in on the hole in the Union lines and shouted, “Colonel, do you see those colors?” (pointing at the advancing Confederate forces) “Then take them!”

The attacking Confederate forces consisted of General Cadmus M. W Wilcox’s Alababam Brigade of Anderson’s Division (A.P. Hill’s Corps). The day before, nearly 1,800 men had answered roll call in Wilcox’s Brigade. Now, those Rebels were driving across Plum Run to assault the gap in the Union line along Cemetery Ridge. If they succeeded, the Federal troops would be split and broken.

Ironically, do you know what Col. Colville ordered?

He ordered them to fix bayonets.

Ordering his men to fix bayonets, Colonel Colville led the 262 Minnesotans against the Alabamans, nearly five times the Gophers’ number. Lt. William Lochren of the First Minnesota remarked, “Every man realized in an instant what that order meant; death or wounds to us all, the sacrifice of the regiment, to gain a few minutes’ time and save the position and probably the battlefield.”

God bless the Minnesota, the crew that serves aboard and the country she defends.