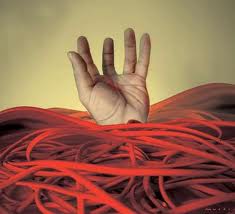 Let’s face it.  Government IS red tape.  Folks in government are faced with making decisions that are based on the same basic premise that the rest of us make decisions on.  Namely, incentives.  People are incented in the same manner no matter their profession or walk of life.  And in politics, the incentive is to not error.

There is no incentive to lead.  While it would be nice, it’s not required.  Really, all you have to do is not make a mistake.  Just avoid decision making and talk.  A lot.  And just.  Don’t.  Make.  Bad.  Decisions.

And that’s how we get this.

END_OF_DOCUMENT_TOKEN_TO_BE_REPLACED

Only The Government Can Save Us: Alabama Tornadoe Edition

All are failings of men.  People, left to their own devices are unable to care for their neighbor.  At least without profit or reward.  And so it is that government must come to the rescue.  It is government, and only government, that can take away the risks of life and grant peace and serenity.