I’m gonna try and get back into this thing and I thought this would be a good time. We have Trump, we have AOC, we have a new SCOTUS and maybe a newer one coming.

We have what seems like a runaway herd of donkeys vying for the shot at the title and much more.

As an added bit of fun, I am starting a ‘Book Club’. My stack of books is only growing, never shrinking. Maybe if I read with a purpose I can force myself to whittle it down.

Grab an Amazon, buy a book. Get a cup of coffee, beer or bourbon and join the discussion.

First book is ‘Coming Apart’ by Charles Murray. First post in two weeks to allow y’all –or me if there’s no one here- to buy, ship and prepare. 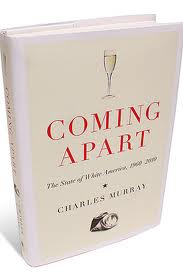 I’ve posted extensively on a book by Charles Murray – “The Bell Curve”.

I bought the book and set it i my stack – forgotten for many many months.  Then I heard someone quote “Coming Apart”, bought it and remembered that I had “The Bell Curve”.  I read it without being aware of the controversy.  Then I hit the chapter that created the stir.

I remember thinking then that the book could have stood alone without the work on race; IQ and its impact on life outcomes is fascinating enough without adding the very difficult conversation regarding race.

Anyway, Mr. Murray received such grief for “The Bell Curve” that when he wrote “Coming Apart” he focused only on white analysis.  While I’m not going to do a chapter by chapter breakdown this time, I am going to post insights that I find interesting.

Starting with a 25 question survey.  Mr. Murray included it in the book to provide insight to the likely audience of the book and how far removed they are from “the rest of America”.

I found this neat engine:

Take the test.  And report your scores in the comments.

I CAN NOT FATHOM a family that would score 2 on that test.  Can not do it.