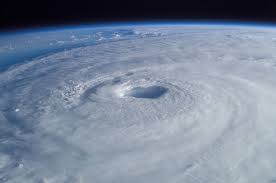 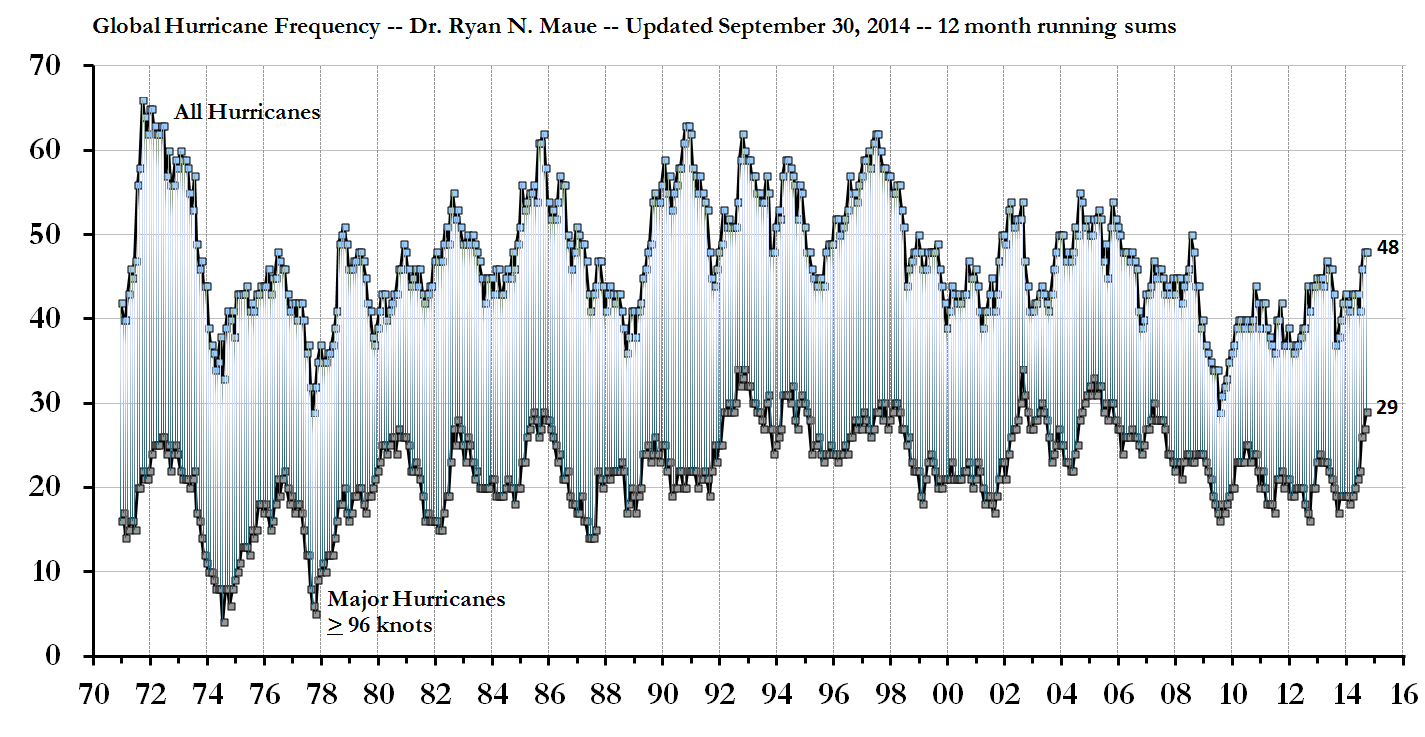 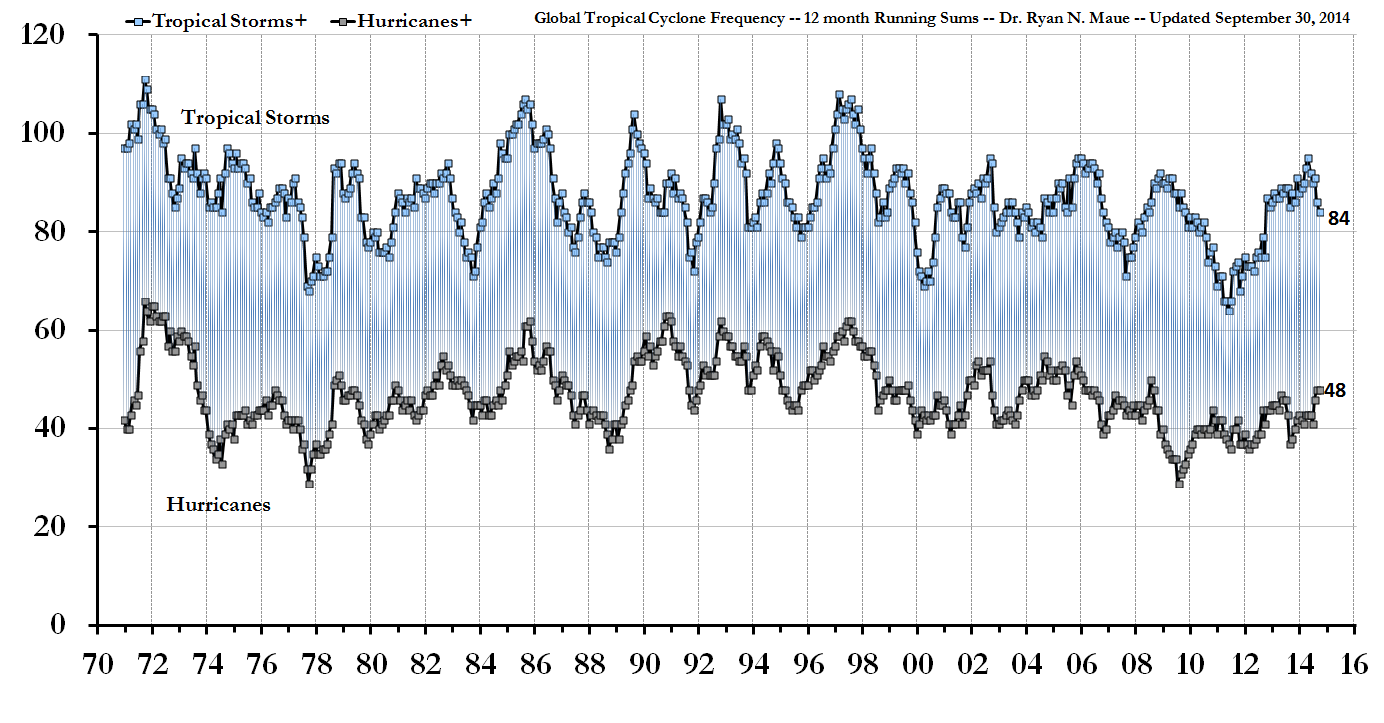 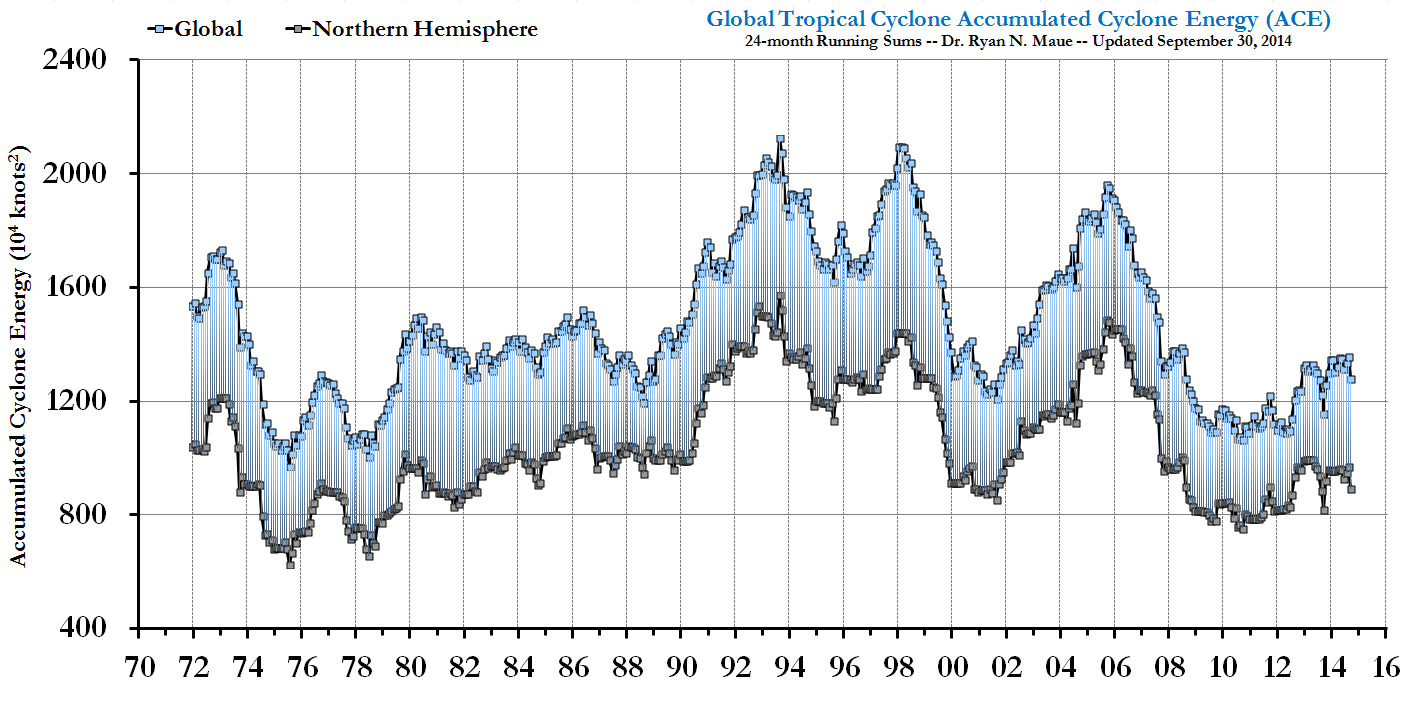 The hurricane season is near over.  Once Irene hit, I was kinda focused on the damage it did to North Carolina and then I, well, I kinda forgot about the season.  Didn’t seem to be any more storms.  Then I saw that Mexico is going to be hit and I remembered I haven’t posted an update for quite some time.

So, where were we?

Though August and September we are at:

With November right around the corner, it’s looking like we’re gonna hit the lower end of the predictions this year.  Further, the National Hurricane Center is reporting that the accumulated cyclone activity. ACE, is right on track.

Another good year for the guessers.

Even though hurricanes often hit those places in the country where people are concerned about “guns and Bibles” I knew that the media would be quick to jump on Irene as an indication that we are experiencing Global Warming.  The fact that t hit the North East only assured that this mem would come all the sooner.

The scale of Hurricane Irene, which could cause more extensive damage along the Eastern Seaboard than any storm in decades, is reviving an old question: are hurricanes getting worse because of human-induced climate change?

“On a longer time scale, I think — but not all of my colleagues agree — that the evidence for a connection between Atlantic hurricanes and global climate change is fairly compelling,” said Kerry Emanuel, an expert on the issue at the Massachusetts Institute of Technology.

Among those who disagree is Thomas R. Knutson, a federal researcher at the government’s Geophysical Fluid Dynamics Laboratory in Princeton, N.J. The rising trend of recent decades occurred over too short a period to be sure it was not a consequence of natural variability, he said, and statistics from earlier years are not reliable enough to draw firm conclusions about any long-term trend in hurricane intensities.

“Everyone sort of agrees on this short-term trend, but then the agreement starts to break down when you go back longer-term,” Mr. Knutson said. He argues, essentially, that Dr. Emanuel’s conclusion is premature, though he adds that evidence for a human impact on hurricanes could eventually be established.

While scientists from both camps tend to think hurricanes are likely to intensify, they do not have great confidence in their ability to project the magnitude of that increase.

One climate-change projection, prepared by Mr. Knutson’s group, is that the annual number of the most intense storms will double over the course of the 21st century. But what proportion of those would actually hit land is another murky issue. Scientists say climate change could alter steering currents or other traits of the atmosphere that influence hurricane behavior.

Oh how I wish I majored in English and wanted to write novels:

Gore enrolled in Harvard College in 1965, initially planning to major in English and write novels, but later deciding to major in government.  On his second day on campus, he began campaigning for the freshman student government council, and was elected its president.

Although he was an avid reader who fell in love with scientific and mathematical theories,he did not do well in science classes in college, and avoided taking math.   His grades during his first two years put him in the lower one-fifth of the class. During his sophomore year, he reportedly spent much of his time watching television, shooting pool, and occasionally smoking marijuana.

So, what do scientist say?  Ya know, scientist who actually study science and stuff?  Oh, AND study climate science?

Tropical cyclone accumulated cyclone energy (ACE) has exhibited strikingly large global interannual variability during the past 40-years. In the pentad since 2006, Northern Hemisphere and global tropical cyclone ACE has decreased dramatically to the lowest levels since the late 1970s. Additionally, the frequency of tropical cyclones has reached a historical low.

So.  There ya go.  The short term trend is showing s decrease in ACE; or storm strength.  The Times reports an increase, as if it’s fact, and then Al Gore announces anyone disagreeing with that statement is a racist.

Make up a fact, report it in the Times and then let a raging Leftist report that anyone who disagrees must be racist.  Then, don’t report it.

By the way, for further evidence that tropical storm activity is just CRAZY increasing, see this chart:

Scary isn’t it?  The way that storms are increasing isn’t it?

As we transition from Global Warming into climate change, we continue to debate the science.

We point to historical levels of CO2 and the temperature at the time. We can look at the rise in the concentration of CO2 in recent years and watch as recent temperatures soar.

But can we use the data that we think we have and make a prediction that turns out to be accurate?

Time thought it did.  I think they’re wrong.

END_OF_DOCUMENT_TOKEN_TO_BE_REPLACED

It’s time.  Time for that annual prediction made by predictors.  And what they’re trying to predict is the hurricane season.  And to be honest, I feel sorry for ’em.