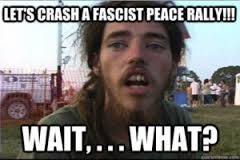 I have virtually no idea what folks are protesting at Missouri – something concerning a culture of fear I think.  Or oppression.  Or bigotry.

All things we should agree to want to see less of rather than more of, to be sure.

But this post isn’t about the cause or the reason or the specific event; it’s about the protest itself, the people that protest and the tactics they employ.

Not sure how I’d react if I was the dad of one of those wilting daisies in the video.  At first I was pretty irritated at those college kids in the footage, but having had time to reflect, I can see that these kids are being driven by the adults in the confrontation.

But really, these people, this protest movement; how are we supposed to take them seriously?  How do we interface and converse with people who have completely lost their mind?  How do you have a conversation with people who have NO room for debate?  Any dissension from their perfect point of view is met with HATE and INTOLERANCE.

How do you have a conversation with someone that can’t see a journalism student has the same right to the square as the protesters?

How do you have meaningful discourse with someone who advocates “No bad touch” and yet is quite willing to assault a photographer?

How do you debate the tender mercies of tolerance with someone who has none?

What kind of meaningful conversation regarding institutional intimidation can be had with people who very clearly mean to intimidate?

The answer?  None and you can’t.

The only, and I mean ONLY, upside to this whole thing is the incestual nature of the fight.  We don’t have liberals fighting conservatives or dems and repubs.  We don’t even have the 99% vs the 1%.  Here we have intellectual elite vs themselves.  We have privileged college administrators squaring off with the frankenstein they themselves created.

It reminds me of the old saw: “Mr. President, in a war between Iran and Iraq, who do you root for?”

These university administrators have fostered and coddled this behavior.   They have created it.  And nurtured it.  They own it.  I shed no tears for those administrators that lost their jobs.

Oh, and finally, how do you take this woman seriously:

Dr. Melissa A. Click earned her Ph.D. from the Department of Communication at the University of Massachusetts, Amherst. Her research interests center on popular culture texts and audiences, particularly texts and audiences disdained in mainstream culture. Her work in this area is guided by audience studies, theories of gender and sexuality, and media literacy. Current research projects involve 50 Shades of Grey readers, the impact of social media in fans’ relationship with Lady Gaga, masculinity and male fans, messages about class and food in reality television programming, and messages about work in children’s television programs.

Click’s dissertation for her Ph.D. from the University of Massachusetts Amherst was about the “commodification of femininity, affluence and whiteness in the Martha Stewart phenomenon,” according to her CV. You can read the full dissertation here.

This the woman screeching for more ‘muscle’ to handle the ‘free’ press.

This entry was posted in Idiots on Parade and tagged Melissa Click, Missouri University, Student 520. Bookmark the permalink.

9 responses to “Musings on Young Leftists”