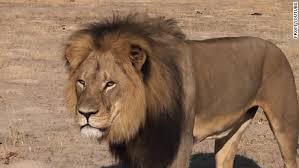 Much MUCH talk about Cecil the Lion on my feeds the last day or two:

(CNN)Cecil the lion is dead, killed illegally in Zimbabwe, authorities allege, by a foreign hunter or hunters who paid about $55,000 for the privilege.

Cecil was part of an Oxford University research project and wore a GPS collar.

He was lured out of a national park with food, shot with a crossbow, tracked for 40 more hours, then finished off with a gun, said Johnny Rodrigues, head of the Zimbabwe Conservation Task Force.

If the cat was lured out of the park, the hunt is illegal and those responsible should be held accountable.  But let’s be clear, hunting big game may be big game’s only shot at survival:

Fewer than 5,000 black rhinos are thought to exist in the wild, and in an effort to preserve the species, the Dallas Safari Club is offering a chance to kill one.

The Texas-based hunting organization is auctioning off a permit to hunt a rhinoceros in Nambia. It’s a fundraiser intended to help save the larger population.

The idea may sound counter-intuitive, but Dallas Safari Club executive Ben Carter tells NPR’s Jennifer Ludden that raising the funds to support the species is what many scientists and biologists believe is the best way to grow the population of black rhinos.

“It takes money for these animals to exist. A lot of people don’t recognize that,” Carter says. An endangered species like the black rhino needs a lot of support — land, protection, management, studies. “This is one way to raise a lot of money at one time,” he says. “That can make a huge impact on the future of the species.”

But certainly killing is not the best way?!?

Carter says many of those who object are not educated in the role that hunting plays in conservation. A habitat can only sustain a certain population, he says, and any excess can be harvested and used to raise money through selling things like hunting licenses and permits.

The winner of the Dallas Safari Club’s auction will hunt a specially selected rhino. Namibia’s Department of Wildlife looks for a rhino that’s too old to breed — and too aggressive to stay in the herd. When black rhinos get older, Carter says, they remain territorial and sometimes kill younger rhino bulls and calves. He says the department often removes these rhinos for the protection of the population anyway.

Not to mention that when the animals belong to ‘everyone’ they belong to ‘no one’.

Tragedy of the Commons.

This entry was posted in Environment and tagged Big Game Hunt, Black Rhino, Cecil the Lion. Bookmark the permalink.