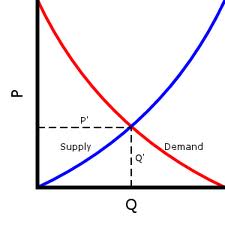 The minimum wage debate is heating up again.  On the Left, we have those that think the minimum wage needs to be raised.  Those of us on the right, disagree – we either think that the minimum wage is set just fine, or, if you are more honest, would like to see the concept abolished completely.

Sadly, the debate doesn’t come down to facts and science.  Rather, one side is using populist rhetoric while the other tries and tries to polish an unpopular message that setting a price floor results in surpluses.

Listen to the debates and you’ll hear what I’m talking about  Just this morning I was listening to The Diane Rehm Show and her panel was discussing the minimum wage.  The two supporters of the law invoked such constructs as “The minimum wage hasn’t kept pace with inflation” and “The purchasing power of the minimum wage is lower than it was 60 years ago”.

These things, while true, have nothing to do with the debate of whether or not a minimum wage is a good thing.

And it doesn’t end there.  I’ve heard the debate move into the fact that as the Holiday Season approaches, the republicans actually wanna end unemployment benefits just as people are trying to pay for heat in their apartments.  That as the gift giving intensifies, the republicans wanna take away the money that a growing number of people are dependent upon.

Again, tugs of populism that have nothing to do with the underlying facts of the minimum wage.

The above diagram is the Supply – Demand curve showing market equilibrium at point P and Q prime; where the two curves intersect.  Slide price up and demand is reduced while supply is increased.  And if that price happens to be above that market clearing price – you end up with a surplus of the commodity; in this case – labor.

This is undisputed.  There is no arguing this.

So, my conversation In Real Life are beginning to change when it comes to the minimum wage.  I’m beginning to point out that minimum wage jobs are NOT MEANT TO SUPPORT A FAMILY.  They are, in fact, meant to be transitory jobs that provide employers with inexpensive labor and provide laborers invaluable On The Job Training.

Looking further into the data suggests that less than 3% of wage earners make the minimum wage.  And of those, a decent number live in a household making the median income.

Another aspect of my conversations is this – and it’s critical – it MUST be acknowledged that both myself and my friend I’m debating admit that each of us is acting in manner that we think would benefit the marginal employee; the guy making the minimum wage.  Without such acknowledgement we are debating intention and not policy.  And when it comes to intention, I have no use for that brand of people who think that I want some people to have a worse life in order that I have a better one.

2 responses to “Supply And Demand: Labor”