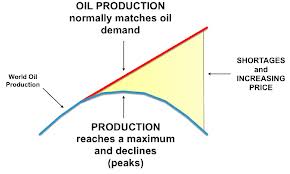 Peak oil.  A fascinating concept.  Motley used to scare children into thinking that the planet will die and we’ll freeze due to lack of usable fuels.

Or starve because the economy will tank as oil prices continue to rise and all goods and services become too expensive for the common man to afford.

Technically it means, at least I think it means, the moment when new discovers of oil are fewer than the increasing demand for oil.  We begin to see supply diminish and demand increase.

However, there is a small catch.  The oil that is counted as “discovered” is only that oil that is economically feasible to obtain.  Oil on the moon?  No good, too expensive.  Oil 25 miles deep?  Same thing.

However, technology is catching up and pushing the concept of peak oil further and further into the future:

Rising U.S. shale oil production will help meet most of the world’s new oil demand in the next five years, even if the global economy picks up steam, leaving little room for OPEC to lift output without risking lower prices, the West’s energy agency said.

“North America has set off a supply shock that is sending ripples throughout the world,” IEA Executive Director Maria van der Hoeven said on Tuesday.

This entry was posted in Energy, Politics: National, Technology and tagged Peak Oil. Bookmark the permalink.