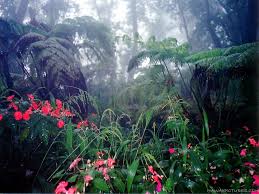 Scanning NPR the other day when I came across an article on Ecuador and their rain forests:

The government of Ecuador has abandoned a plan that would have kept part of the Amazonian rainforest off limits to oil drilling. The initiative was an unusual one: Ecuador was promising to keep the oil in the ground, but it wanted to be paid for doing so.

The oil sits under the Yasuni national park, one of the most biodiverse places on Earth — orchids, jaguars, monkeys, birds. To get to the corner of the park that holds the oil, you have to take a plane, then a motorboat, then paddle a canoe. “Even the sound of the motor will destroy the fragility of this place,” Ivonne A-Baki, who works for the Ecuadorian government, told me this year.

In 2007, the country’s president, Rafael Correa, told the world that Ecuador would leave the oil in the ground. But the country wanted to be paid half of what the oil was valued at, at the time. Ecuador wanted $3.6 billion.

All kinds of governments are going to pay another nation to do nothing.  And what if Ecuador decides later, say in 10 years, that they really need that oil and drill anyway.

Anyway, an interesting fact is that the planet is getting greener:

Did you know that the Earth is getting greener, quite literally? Satellites are now confirming that the amount of green vegetation on the planet has been increasing for three decades. This will be news to those accustomed to alarming tales about deforestation, overdevelopment and ecosystem destruction.

And, ironically, it’s because we are burning fossil fuels:

The inescapable if unfashionable conclusion is that the human use of fossil fuels has been causing the greening of the planet in three separate ways: first, by displacing firewood as a fuel; second, by warming the climate; and third, by raising carbon dioxide levels, which raise plant growth rates.