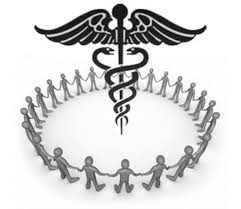 During the healthcare debate, one of the alternatives to a government based solution was one where the market would be more free to act.  Right now, whether through insurance, private or one of the Medi’s, people are really spending someone else’s money.  This leads to two bad results:

When I’m the one paying for the services, I’m more careful on the services I buy.  Take my vision [please!  ha] coverage for example.  As I’ve aged I’ve gone through 4 phases of vision:

In the past, when my vision transitioned from great to merely “kinda bad” I wouldn’t need new glasses every time I had my eyes check; my eyes did not get worse.  But because I had insurance that covered the cost of glasses, I would get a new pair each visit.  One for the bedroom, the home office, the work office and so on.  Today, however, my vision is changing.  Each visit requires a new pair of glasses.  And the cost of the new glasses is significantly more than the cost of those glasses; I am paying the large share now.

The result?  I push my vision purchases out as long as a I can.  I don’t get new glasses each visit – I push my way through older glasses for as long as I can before buying new.

On top of no longer over consuming vision services, I shop on price.  Because I now care how much the glasses cost, I find the best value.  In the past, I couldn’t care less how much the frames cost because I wasn’t paying for them.  To me, convenience mattered and if the office I was at had a product I liked, I bought ’em.

Why is this important?  Because the government recently released how much hospitals charge for services:  [Hat tip to Ryan Grace]

For the first time, the federal government will release the prices that hospitals charge for the 100 most common inpatient procedures. Until now, these charges have been closely held by facilities that see a competitive advantage in shielding their fees from competitors. What the numbers reveal is a health-care system with tremendous, seemingly random variation in the costs of services.

Virginia’s highest average rate for a lower limb replacement was at CJW Medical Center in Richmond, more than $117,000, compared with Winchester Medical Center charging $25,600 per procedure. CJW charged more than $38,000 for esophagitis and gastrointestinal conditions, while Carilion Tazewell Community Hospital averaged $8,100 in those cases.

Now, if we can just get a system that builds in market forces, the price of healthcare will come down without the need of a massive government solution.

This entry was posted in Economics, Health Care and tagged Free Market. Bookmark the permalink.

One response to “Wherein Obama Discovers The Market”