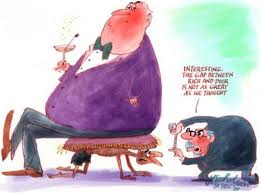 The Youtube video is viral, you have to have seen it.  I’ve seen it posted at least a dozen times.  The one about wealth inequal — yeah, you saw the title.

Anyway, listen to what the narrator says at about minute 1:40 through 2:30

And let’s distribute it, among our 100 Americans.  Well-here’s socialism; all the wealth of the country distributed equally.

Now, for a long time I’ve noticed that the left has critiqued the right for the incorrect use of the term “socialism”.  And I’ve largely agreed with them that the term has been used incorrectly.  The argument that they haven’t been able to identify a word that means “redistribution of wealth” doesn’t change the fact that socialism really means the state ownership of production.

But this is the first time I can remember an actor of the left using the term in the way someone from the right would.

This entry was posted in Politics: National and tagged Socialism. Bookmark the permalink.