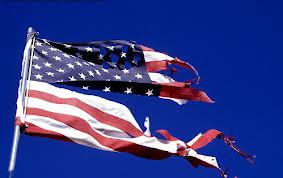 Obama won the election.  I think the man was born in America.  I don’t think he stole the election.  I’m sure democrats cheated in some polls and voter registration drives; I’m equally sure the republicans did the same thing.

I think that Obama didn’t have a platform.  I think he is an “American Idol” “Dancing With The Stars” president.  He appears on The View, Late Night and The Tonight Show.  He conducted interviews on MTV and local rap stations.

But the man won the election.  And this talk of secession is crazy and nothing more than than that; crazy people saying crazy things.

In the days after the election, fantasies of blue-state secession ricocheted around the Internet. Liberals indulged themselves in maps showing Canada gathering the blue states into its social democratic embrace, leaving the red states to form their own “Jesusland.” They passed around the scathing rant from the Web site Fuck the South, which lacerated the chauvinism of the “heartland” and pointed out that the coasts, far from destroying marriage, actually have lower divorce rates than the interior.

These sentiments were so pronounced that they migrated into the mainstream. Speaking on “The McLaughlin Group” the weekend after George W. Bush’s victory, panelist Lawrence O’Donnell, a former Democratic Senate staffer, noted that blue states subsidize the red ones with their tax dollars, and said, “The big problem the country now has, which is going to produce a serious discussion of secession over the next 20 years, is that the segment of the country that pays for the federal government is now being governed by the people who don’t pay for the federal government.”

A shocked Tony Blankley asked him, “Are you calling for civil war?” To which O’Donnell replied, “You can secede without firing a shot.”

Lawrence O’Donnell.  The, ahem, famous talk show host on MSNBC once spoke of secession. When asked if he was calling for a civil war he simply replied, Well yeah, I guess kinda.”

So yeah, the talk about secession is crazy.  It’s also not new.  Nor is it an indication of the unraveling of a party specific.  It’s just the ramblings of a few folks who’ve invested a lot in their guy winning.

By the way, notice the comment about who is supporting whom.