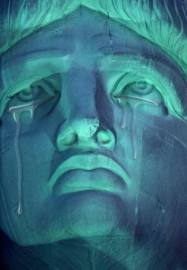 I have often thought that makes America unique in the history of the world is not her physical boundaries.  It’s not the vast expanse of land mass bordering two oceans.  It’s not the natural resources.

It’s the people that have cherished the concept of Liberty that have made America what she is.

It’s the ideal, an ideal that may not be able to be codified, that each man is sovereign.  That we’re obligated only to ourselves to establish what it is that is paramount in our lives.  That we are at liberty to make decisions that dictate our lives without coercion from outside influencers.

We’ve decided that we wanna change.  We wanna be more like the socialist-democracies of western Europe than the independent liberty-minded nation of the past.  I don’t agree with that decision.  I’m afraid that we’ve conscripted our children to live in a world that more resembles Spain and Greece than the America I knew.

I get that I’m out-voted.

But Liberty weeps tonight.  There can be no other way to interpret today’s decision.

7 responses to “What Makes America America”