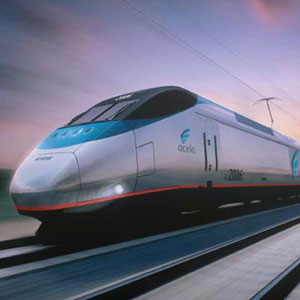 Light-rail and high-speed trains have long been the darling of the Left.  If some local or state government can come up with a plan to build trains, the Left is only TOO anxious to deliver the money.

I admit that I’m flummoxed by this fixation.  But let’s take a look:

The idea is based on two angles:

How much of this is true?  And to the extent that it IS true, what price are people willing to pay?

END_OF_DOCUMENT_TOKEN_TO_BE_REPLACED

Planes, trains and automobiles.  It’s a famous movie, but what really has the attention of politicians everywhere is this very same concept.  Planes, trains and automobiles.  Specifically, “how do we get fewer automobiles and more trains?”.  Everywhere people are requesting and demanding that we expand our mass transit system.  Part of it is a pander to the people who are best served at the expense of the rest of us.  Lately, though, we have begun to see the Global Warming crowd clamor that we need to implement more transit in order to reduce the number of carbon producing cars.  Still others claim that we have reached peak oil and going forward, we need to reduce our dependency on foreign oil.

In each case, the supporters are wrong, blind or both.  But nobody is as wrong as often or as blind as California.  Check this out via Reason:

For three years, Veronique Selgado took BART from the East Bay to her job working for an airline at San Francisco International Airport. But she recently switched to driving because BART raised fares and upped its SFO round-trip surcharge from $3 to $8, boosting her daily trip cost to nearly $20.

“It’s outrageous,” Selgado said. “At what point do they stop raising the prices, when it’s $50 a day to go round-trip to work? At what point does BART stand back and say, ‘People can’t pay that much to commute’?”

Millbrae resident Robert Smith, 63, had taken BART and Golden Gate Transit to his job in Sausalito because his employer provided transit vouchers, but eventually he threw up his hands, bought a Honda Civic and started driving.

It took him 2﻿1/2 hours each way by train and bus, turning his nine-hour workday into a 14-hour endeavor. Now he drives, and it takes him 45 minutes each way, which he said is well worth the extra gas and toll bridge costs.

Rick Mann loves public transit but hates the two hours and 15 minutes it takes him to walk from his Milpitas home to a transit station, catch a train, transfer to another train and then walk to his job as a software engineer in Sunnyvale.

The point is this: “Mass transit doesn’t work”.  We aren’t dense enough to make it work.  People live too far from where they work.  Transfers are common.  Further, because this is the government, making upgrades to the system is seen as an expense, not an investment.  As such, expenses are minimized meaning fewer trains and busses and fewer stops.  This raises the time of the commute and reduces riders.  But we have to continue to meet the costs.  And that means higher fares and higher taxes.

And soon, gentle reader, that means I am going to be taxed here in North Carolina so that someone in San Francisco can ride a bus that they don’t wanna ride.

This is exactly what I am talking about when it comes to this whole transportation thing:

DATA was supposed to open its $17.6 million Durham Station Transportation Center in February. But now, the new center, located at the old Heart of Durham Hotel site on Chapel Hill Street, will not be open until the middle of March, according Ieshia Robertson, a city spokeswoman.

And to clarify any b lame:

Robertson said the actual facility will be completed on time, but N.C. Department of Transportation is requiring the city to do some work on the surrounding streets.

Look, I know that we want mass transit to succeed.  But it won’t.  Not here, not now.

So, while this is not light rail and that whole boondoggle, this may come close?  Or not.  I’m not sure.  But while reading this I was struck by two key facts:

Local leaders drew encouragement last year from an economic study by Amtrak and the state Department of Transportation. A Hillsborough stop would boost ticket revenue enough to trim the state’s Amtrak subsidy by a projected $56,000 a year.

Now, first of all, any study done by either Amtrak or the State Department of Transportation should sound the alarms in any neutral observer.  But, okay, for the sake of the article, lets go with it.  Let’s go with 56k a year.  Then this:

To protect one potential site for a train station, the Hillsborough town board agreed last summer to pay $600,000 for 20 acres known as the Collins property, just south of downtown.

So, let me get this straight.  In order to save $56,000 year, the town of Hillsborough spent 600 large to buy the land!.  Before this is over, with building costs creating the side line for the actual railroad and the rest of what I am sure is non-trivial costs, this station is going to cost several million dollars.

To save 56k a year.  You could invest 1 million dollars and pull back 56k a year.

Am I missing something?