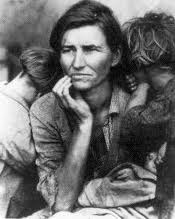 WASHINGTON — The growing gap between the richest Americans and everyone else isn’t bad just for individuals.

So says a majority of more than three dozen economists surveyed last week by The Associated Press. Their concerns tap into a debate that’s intensified as middle-class pay has stagnated while wealthier households have thrived.

A key source of the economists’ concern: Higher pay and outsize stock market gains are flowing mainly to affluent Americans.

That’s the academic framing to be sure – the more populist message is better articulated by Obama himself:

“The combined trends of increased inequality and decreasing mobility pose a fundamental threat to the American dream, our way of life, and what we stand for around the globe,” Obama said at a speech in Washington, D.C. hosted by the progressive think tank Center for American Progress.

Obama called for a litany of proposals — a higher minimum wage, stronger labor laws and a budget which promotes both education and social safety programs — that he said would provide better economic stability for families in the aftermath of the recession that took hold as he first took office in 2009.

THAT is the message that we’re gonna hear for the next year, at least, and then its echos as we move into the Presidential election coming in 2016.

What is this thing that folks call “income inequality”?  Personally I take it as the difference between what the poorest Americans earn vs the amount of money earned by the wealthiest Americans.  Examples that support this idea are statements that take this general form:

Income for middle class America have stagnated while the richest among us only get richer.

That’s my paraphrase, but I think it’s accurate.  Basically it’s the idea that the rich are getting richer while the poor are getting poorer.

There are two camps in the “why it’s bad” side:

1.  An ever and ever wider gap is bad for the economy

A key source of the economists’ concern: Higher pay and outsize stock market gains are flowing mainly to affluent Americans. Yet these households spend less of their money than do low- and middle-income consumers who make up most of the population but whose pay is barely rising.

“What you want is a broader spending base,” says Scott Brown, chief economist at Raymond James, a financial advisory firm. “You want more people spending money.”

Spending by wealthier Americans, given the weight of their dollars, does help drive the economy. But analysts say the economy would be better able to sustain its growth if the riches were more evenly dispersed. For one thing, a plunge in stock prices typically leads wealthier Americans to cut sharply back on their spending.

“The broader the improvement, the more likely it will be sustained,” said Michael Niemira, chief economist at the International Council of Shopping Centers.

A wide gap in pay limits the ability of poorer and middle-income Americans to improve their living standards, the economists say.

This argument is more data driven and relies on an heavier understanding of the science of economics.  This gap is bad because of this data driven list of reasons.

The second reason, in my mind, is more of a populist message and likely what we’ll hear from the stump:

“The opportunity gap in America is now as much about class as it is about race,” Obama said, “and that gap is growing.”

I’m not going to be able to shape the stump, but maybe we can discuss the data.