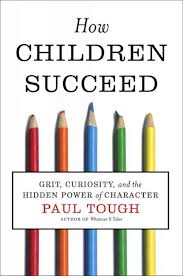 It seems that I have a stack of books that stretch forever high – forever.  And I never seem to get through them.  Worse, I start a book, get part way through and start another.  This habit results in me having 2-3-4 books in flight at all times.

That has to end, so maybe blogging my reading will enhance my completion rate as well as get me to finish the book I’m on before picking up a new one.

Anyway, the first book to hit the blog is How Children Succeed.

I came across the book through a recommendation by Dr. Steve Green over at Fully Myelinated.  Steve mentioned that it was one of his favorite books on how kids achieve.  Further, Steve posts from a liberal perspective, so in the spirit of bi-partisanship, I felt that I owed it a college try.

All in all, not a bad read, though it did drag at points.

Anyway, here it is:

The book is a look at how school children achieve in school.  I’ve been interested in this topic for quite awhile now.  I’m mostly interested in how we can increase reading, graduation and college completion, however, I think it’s important to study the why’s and the how’s.

In full disclosure, I’m highly influenced by the concept of IQ and the heritability of IQ.  While I’m sympathetic to the notion that IQ and IQ tests are, at best, imperfect measurements, the idea that there exists an “intelligence”, described by g, is a powerful one.

Further, I have read and am a firm believer in the research presented in “The Bell Curve”.

The book starts with the author researching a pre-school and identifying the fact that the school was using non-cognitive techniques to engage the kids.  And, as a new father, he was fascinated.  After all, all the rage in the research suggested that kids need to focus on cognitive techniques in order to maximize achievement later in life.

However, there may be a different way.  And at the center of that movement is Dr. James Heckman, an economist from the University of Chicago.  And the good doctor had studied the children of The Perry Preschool Project.  This is the project that demonstrated a preschool has  a positive impact on achievement but that benefit faded after only a few years.

However, when Dr. Heckman went deeper into the data he found that the benefits of that preschool manifest later in life:

Heckman discovered that while the preschool didn’t enhance IQ it DID manifest change in those kids.  And that change occurred in what Heckman would call non-cognitive skills:

This book is about those skills and how they help contribute to student achievement.

This entry was posted in Education and tagged Books, How Children Succeed, IQ. Bookmark the permalink.

2 responses to “How Children Succeed”