The State Of Our Infrastructure – Bridges 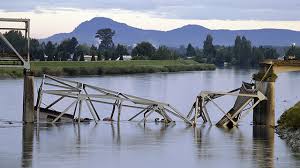 Taking a break from the circus that is Washington for a second.

A seemingly continual drumbeat is the failed state of our infrastructure – our bridges and our roads.  And, of course, the need to spend more money so that we’re no longer failing in that regard but working to improve ’em.

There’s been an aspect to that argument that has always eaten’ at me.

What do we do with the infrastructure money we currently have?

The federal HTF was invented in 1956, promising motorists and truckers that all proceeds from a new federal gas tax would be spent on building the interstate system. They aren’t. Congress has expanded federal highway spending beyond interstates to include all types of roadways. And since 1982, a portion of “highway user taxes” have been diverted to urban transit (non highway use). Today, the federal role in transportation includes maintaining sidewalks, funding bike paths, and creating scenic trails.

I would think that before we spend money on bike trails and scenic trails, we ought to fix our bridges.

But speaking of bridges, how bad are they? 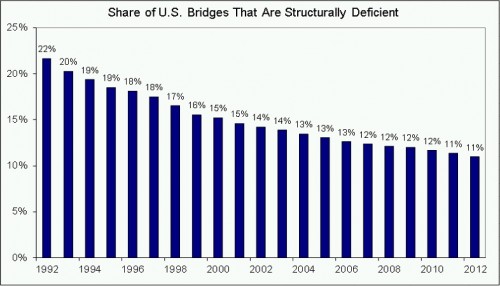 From Cato via Coyote.

There is no trend that demonstrates our bridges are falling down.

This entry was posted in Government and tagged Bridges, Infrastructure. Bookmark the permalink.