Poverty, Africa And The Minimum Wage 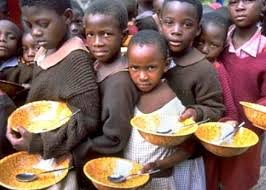 There’s a bunch of talk about the minimum wage with the recent fast-food protests.  People are dismayed that there are jobs that only pay $7.25 an hour and claim that there is no way that you can support a family on that amount of money.

Forget for a second that no one believe you should START a family on $7.25.  Forget that a vanishingly small number of people earn the minimum wage and that it is an entry level position where future job skills are learned.

The economics of the thing is what matters.

In a world that has been faced with bone jarring poverty in large swaths of our populations, and with the ever increasing globalization of our economy, it only makes sense that as millions and millions of people enter the “global work force” that competition for jobs increases.  And as that occurs, the cost of labor is going to go down.

I’ve never understood the Leftist who complains about the diminished wages of Americans while at the same time bemoaning the poverty of people in Asia, India and Africa.

But there is good news.  These regions are leaving poverty behind:

AFRICA’s poverty levels are falling by one percentage point per year, with the absolute number of people living below the poverty datum line declining drastically, the World Bank Group has said.

As a result of the impressive economic growth rate, the continent has been posting in the last 10 years, the poverty rate has gone down, while the number of people living below the datum line of US$1.25 per day, has fallen by nine million in three years.

World Bank Group president, Jim Yong Kim said here during the opening session of the fifth Tokyo International Conference on African Development (TICAD V) that, the bank has placed Africa at the core of its effort to end poverty and boost shared prosperity.

He said the growth the continent had recorded in the last 10 years had impacted on the poverty levels.

“The growth has had an impact on poverty – the poverty rate has been falling at one percentage point a year. For the first time, the absolute number of people living below $1.25 a day has fallen – by nine million in three years,” he said.

Soon these places and their people will cease to be “any job at any price” employees and will enter a condition where they will become consumers.  They’ll surpass their needs of food and clothing and begin to want the Nikes, the iPads and the Plantations.

An industry veteran of 30 years, Barkan’s U.S. home market was “graying”, while the youthful, underdeveloped African continent offered a sweet spot, with a rapidly expanding middle class and no competition from online retailers.

“When Wal-Mart announced it was buying 51 percent of Massmart, I knew that if I was going to stay in business, Africa was where I had to go,” he said.

He moved last year to Ghana, one of the continent’s brightest economic hopes, and his company, BG International, has broken ground on what will be an 18,400-square-metre (200,000 sq feet) enclosed mall in West Accra. Another mall planned for Ghana’s second city of Kumasi is at a similar stage.

Barkan is not alone. Across Africa, commercial real estate developers are responding to the lure of one of the world’s fastest-growing consumer markets and rushing to build malls for eager retailers.

Consumer spending accounted for more than 60 percent of sub-Saharan Africa’s buoyant economic growth, the World Bank said in its Africa Pulse report in April, adding economic growth would accelerate to more than 5 percent over the next three years, far outpacing the global average.

Africa can be said to be rising.  And with it, the wages and hopes and dreams of an entire continent.  And as THAT occurs, the downward pressure on wages in America will ease.

So, fellow Americans, take solace in your hearts that a very predictable economic truth is unfolding.  As the poorest individuals in the world lurch out of abject poverty, our wages will struggle.  But as those poor become consumers, we will recover.

Take solace and rejoice in the power of the economic engine that is capitalism.