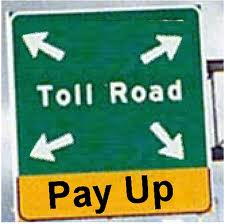 “You have to talk about tolling as an option across the state as we look at how we’re going to generate funds for future projects,” Tata told area business leaders Thursday morning at an annual breakfast meeting of the Regional Transportation Alliance.

However, even republicans are not immune to an ever growing government:

Tata said the transportation department faces significant funding challenges as the state gas tax, a major source of funding, is bringing in less revenue each year.

Although more people are driving in North Carolina, they are driving more fuel-efficient vehicles, including hybrid and electric cars. Drivers living near state borders also cross state lines to avoid paying North Carolina’s gas tax, one of the highest in the Southeast.

I support toll roads in lieu of gasoline taxes, not in addition to.

And let’s not forget that just because the idea of toll roads is a good one that government can’t mess it up:

Andy Lelewski, the state’s director of toll road operations, acknowledges that changes to the Quick Pass system are needed and says he will work with the legislature to make some adjustments.

5 On Your Side first reported about toll road billing problems in August. Since then, we’ve investigated more than 18 complaints from drivers – all but three of whom got on the toll road by mistake.

A wrong veer, and you’re on it. Delay paying the bill when it arrives in the mail, and you’re in for major late fees.

Matesevac’s original toll bill was just 77 cents. The amount was so small, she said, she wasn’t sure how to handle paying it.

“It will cost me more to write the check and send it through the mail than to pay the toll,” she said.

To make it more frustrating, when Matesevac called to pay the bill over the phone, a Quick Pass customer service representative told her that only her husband could make a payment because their system only lists the first name on the title. Matesevac even sent proof that her name was also listed on the title, but Quick Pass wouldn’t budge.

After Quick Pass added a $6 processing fee, Matesevac sent a check for $6.77. In the meantime, she was slapped with a $25 civil penalty and more processing fees.

That’s insane.  People howl when payday lenders charge crazy rates, but this?  This is extortion.

However, people love the toll roads:

Over a little more than three months, the number of toll transactions processed daily by the Turnpike Authority nearly doubled, from 960,000 in December to 1,780,000 in March. The expressway covers 18 miles in Western Wake County, from Morrisville to Holly Springs.

Vehicle traffic on the toll road was also up sharply in the first quarter of 2013, climbing from 19,800 drivers on a typical weekday in December 2012 to 24,900 vehicles in March.

As toll traffic increases, we can increase the toll until The Laffer Curve puts traffic levels where they are most efficient.