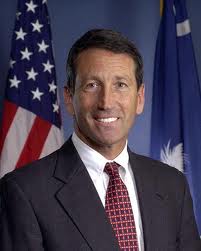 I’m dramatically less interested in Mark Sanford than I was 4 years ago.  Remember, back then Sanford was an up and coming republican star.  Two term governor of a southern red state.  In my mind, he was on the short list of the top contenders for the 2012 ballot.

The came Argentina and the Appalachian Trail.

Sanford rightly was banished from American politic and finished his term in disgrace.  Many, me included, thought that his career was over.

Sanford led attorney Curtis Bostic (R) by 57 to 43 percent as of 8:40 p.m., with 96 percent of precincts reporting. The Associated Press has called the race.

The win is the latest step in Sanford’s rehabilitation after an extramarital affair derailed his political career in 2009 — but his biggest test lies ahead in the Republican-leaning district.

Since he has mounted his comeback, Sanford is 2 for 2.  He “won” the first runoff but failed to obtain the 50% he needed to avoid the second runoff.  And he won this one going away.

The first PPP polling shows the race a toss-up:

This is a Republican leaning district and Barack Obama’s approval rating in it is only 41% with 57% of voters disapproving of him. But Democrats are far more unified than the Republicans are. Busch is winning 87-89% of the Democratic vote while Sanford (76%) and Bostic (72%) are both earning less than 80% of the GOP vote. Busch is also up by 16-18 points with independent voters.

Focusing in on the potential race between Busch and Sanford it’s surprisingly close for one simple reason- voters like Busch and they continue to strongly dislike Sanford. 45% of voters see Busch favorably to only 31% with a negative opinion. On the other hand Sanford is still stuck with a 34% favorability rating and 58% of voters seeing him in a negative light.

I’m betting that right now, Sanford is experiencing his lowest polling numbers of the election.  He’s a veteran of 5 winning elections and is unlikely to make an unforced error.  Further, every single skeleton has likely been exposed.  I’m guessing that he wins relatively easily.

What this means in the larger picture however, is kinda ho-hum.  The seat was republican and, as I mentioned, will probably stay republican.  Both senators are republican and are unlikely to turn blue anytime soon.  He’ll probably never hold the governor’s mansion again, so I don’t see much upside for him outside of his house seat.

This entry was posted in Politics: National and tagged Mark Sanford, South Carolina. Bookmark the permalink.

One response to “Mark Sanford”