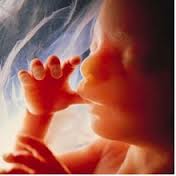 For me, the issue of abortion comes down to two things; life and liberty.

There is a clear difference between a collection of cells and of life.  No reasonable person has any moral compunction about cutting a finger nail, removing hair or even taking a kidney; cells, even human cells, do not constitute life.

However, living human beings have a right to expect to liberty that  is called out in the Declaration; The right to life, liberty and the pursuit of happiness.

Further, I think that most people agree that there is a place and a time; support for abortion in the 2nd trimester falls by more than half when compared to abortion in the first trimester and by 75% when the pregnancy is in the 3rd trimester.

All this adds up to the fact that Americans are very aware of the issue and that two things matter:

The why, except for discretionary reasons, is straight forward.  I suspect the when speaks to the beginning of life.

All this is a lead up to the state of North Dakota defining life at that moment of conception; that time when an egg is fertilized by the sperm:

The Republican-dominated House also approved a so-called personhood amendment that asks voters to change the state’s constitution to recognize and protect “the inalienable right to life of every human being at any stage of development.”

Pretty far out there if ya ask me.

This entry was posted in Life, National and tagged North Dakota. Bookmark the permalink.