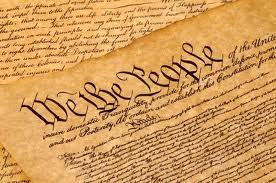 Lately, and mostly, it’s been conservatives and republicans that get all crazy on the nullification kick.  Recently the trend has centered on the 2nd amendment and gun control or regulation.

Trust me, I resonate with the concept and the idea; the federal government is limited in what it can do.  And everything that is not given to the feds is given to the states.  I get it.

But we don’t live in that world anymore.   That world ended when the Supreme Court ruled that a man, on his own land, raising his own wheat, couldn’t grow as much as he wanted to feed his own animals.

So it is with great joy that I see the left jumping on the bandwagon:

CONCORD, N.H. (Mar. 13, 2013) Today in a lopsided vote, the Democrat-controlled State House of Representatives in New Hampshire approved Representative Dan Itse’s HB399, the Liberty Preservation Act.  If passed into law, HB399 would nullify the NDAA “indefinite detention” powers that Barack Obama signed into law at the end of 2011.  The vote was 337-15 (roll call here).

I don’t think this will matter.  Federal law trumps state law, does anyone younger than 40 know what trump is, so there is little hope that this in reality matters, but it’s cool.