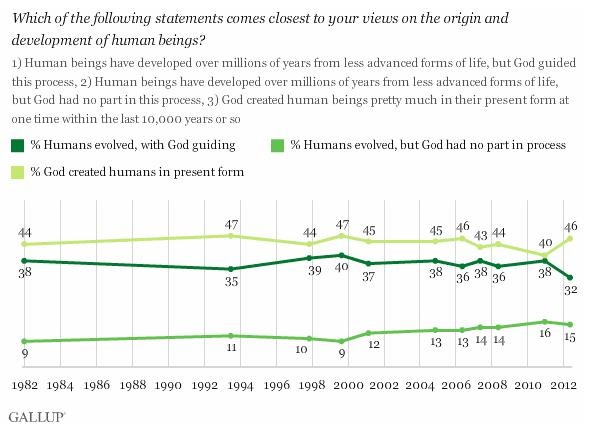 So, I’m just reading around when I came across a Gallup poll on creationism, evolution and who believes in what.  I grew up Christian, went to church almost every Sunday for 18 years, Sunday School ’till I graduated high school, sang in the choir and take my kids to church today – though not every Sunday.

I don’t think I can remember ever thinking, when I was old enough to begin to think independently, that God created humans in human form.  I certainly NEVER believed that science was wrong.  I’ve always accepted that rocks were very old, that people once couldn’t read, write and do the things we can today.

In short, I’ve always felt that evolution was very clearly how we got to where we are today.

So, I’m stunned, freakin’ STUNNED, to learn that a plurality, 46% of American’s, believe that God created humans in current form just 10,000 years ago.

The first thing that came to my mind was that it was that group of people that the Left loves to hate; the Tea Party:

Certainly republicans are leading the charge, but not by the margins I would have thought.  I mean, 41% of democrats think that God created, what I have to believe, is Adam and Eve in literal form.

Only slightly less surprising is the numbers that support my view that God guided evolution to get us where we are today [I’m not sure that we’re the finished form, by the way.  Which may explain my “meh” attitude on supposed crisis like overpopulation and global warming].  I would have thought that as education increased, the view that God guided evolution would decrease: 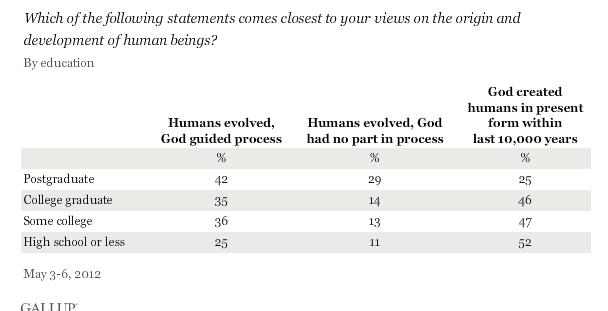 I can’t explain it.