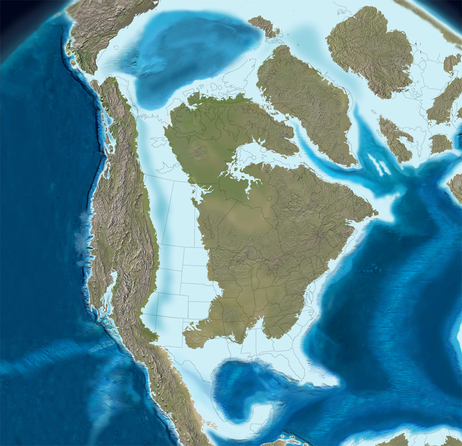 Take a look at the picture above.  It’s from a long time ago.  A very long time ago.  A time nearly 100 million years ago when the oceans covered portions of North America.  Pay extra attention to the coast line that runs through modern day Alabama, Mississippi, Georgia and the Carolinas.

The Deep South had a shoreline that curled through the Carolinas, Georgia, Alabama and Mississippi, and there, in the shallow waters just offshore, were immense populations of floating, single-celled creatures who drifted about, trapped sunshine, captured carbon, then died and sank to the sea bottom. Those creatures became long stretches of nutritious chalk. (I love chalk.) When sea levels dropped and North America took on its modern shape, those ancient beaches — so alkaline, porous and rich with organic material — became a “black belt” of rich soil, running right through the South.

This entry was posted in Elections 2012, Politics: National and tagged NPR, Plankton. Bookmark the permalink.