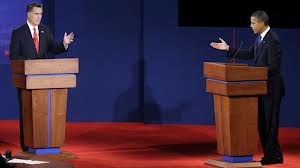 It turns out that a debate can be huge.

Going into Wednesday last week Romney had experienced a series of perceived setbacks.  The video of Romney talking to high dollar donors about the 47% certainly played into Obama’s attempt to characterize him as a member of the rich white guy club.  This only contributed to the continued bad press Romney was generating for his critique of the White House during the Libya crisis.

Romney was having a hard time of it.

People said his only hope was the debate.  However, there was little belief that Romney would even win the debate much less win it by enough to influence polls: 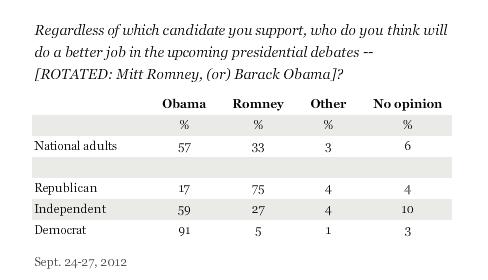 The overwhelming odds on favorite was Obama heading into the debate.  While I favored Romney, he has better ideas and isn’t hampered by Obama’s habit of “aaahhhhing” everything, I thought the win wouldn’t matter.  Further, I was sure that the polls would suggest Obama won regardless of what I thought.

It wasn’t just “not close” it was historical.  Never before has a debate been so lopsided as this one.  From the opening bell to the final round Romney completely dominated Obama.  There wasn’t even one time where Obama even looked like he might rally and make a showing of it.  The night was completely and wholly Romney’s.

Obama’s fate was sealed when he issued this advise to the moderator:

Even Obama knew this was a disaster.

However, what NO ONE could have anticipated was the impact this debate would have on the race.  As I mentioned, Romney came into last week’s contest behind, way behind.  And today…?  Today’s he’s not only closed the gap, he’s leading:

Romney has moved ahead of Obama.

This shouldn’t be surprising to anyone who has the ability to be objective.  Obama has been an abject failure.  His policies haven’t led to prosperity, they’ve led to a suppressed recovery.  His policies overseas are failing, or worse, are undefined to the point that success or failure can’t be determined.

Last week we saw what happens when a life long community organizer goes up against a successful CEO.

It wasn’t even close.