Obama: You Didn’t Build That

Obama’s words are now famous.   In context, out of context, fair not fair, it’s all out there.  The republicans are running with it and the president is denying it.  However, this much is true.

Obama was making reference to the fact that business owners did not get to where they are entirely on their own.  Much of their success is based on the fact that those who came before created an infrastructure, roads and bridges, teachers and firemen, who have made their success possible.

And because of this, Obama feels, the very wealthiest among us, should be willing to “give a little back.”  Now, it’s important to put this in context, as ironic as that might be.  Here Obama is talking about his desire to let the Bush tax cuts expire for the wealthiest Americans.  Those Bush tax cuts that he wants to keep are the federal income taxes for all Americans earning less than $250,000.

The conversation is federal income tax.  We’re not talking about sales tax.  No mention of property tax.  Not a whisper about social insurance taxes.  This conversation begins and ends with federal income tax.  Keeping the Bush rates for everyone but the wealthiest using the logic that those business owners didn’t build the infrastructure that allowed them to be successful.

In researching TPC’s critique of the Romney tax plan I found some numbers that will prove to be illustrative to Obama’s, his own logic, argument: 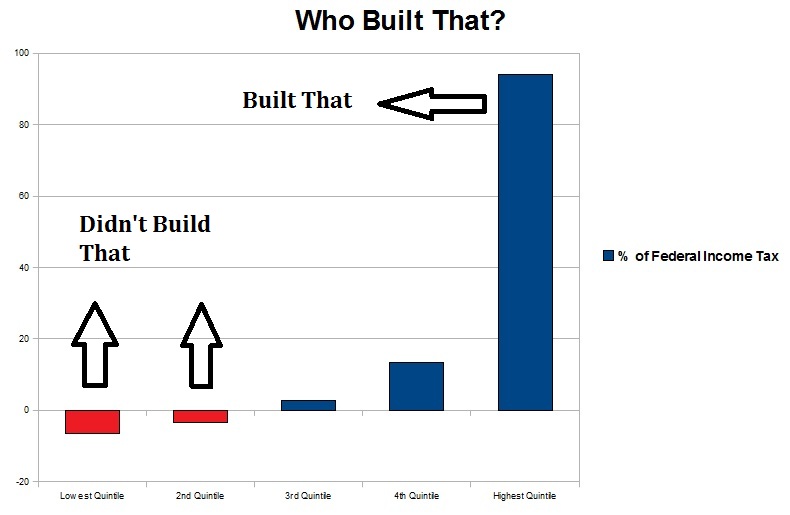 This entry was posted in Elections 2012, Middle Class, Politics: National and tagged Barack Obama, Taxes, You Didn't Build That. Bookmark the permalink.

One response to “Obama: You Didn’t Build That”