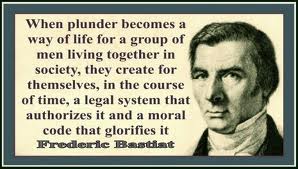 It is of these three things that it may be said, apart from all demagogic subtlety, that they are anterior and superior to all human legislation.

Nature, or rather God, has bestowed upon every one of us the right to defend his person, his liberty, and his property, since these are the three constituent or preserving elements of life; elements, each of which is rendered complete by the others, and that cannot be understood without them. For what are our faculties, but the extension of our personality? and what is property, but an extension of our faculties?

If every man has the right of defending, even by force, his person, his liberty, and his property, a number of men have the right to combine together to extend, to organize a common force to provide regularly for this defense.

This then, is the proper role of government.  There is no right to life at the expense of another man’s labor.

This entry was posted in Government, Liberty and tagged Frederic Bastiat, The Law. Bookmark the permalink.

2 responses to “The Law”