The second installment of the comparison of socioeconomic status and IQ.  This post examines the impact of each on:

In a previous post, I showed various charts.  Among them is the probability of cropping out of school based on the SES of the family: 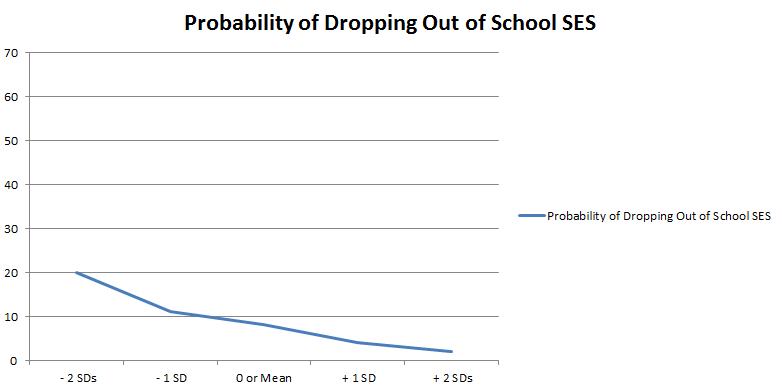 The pattern is clear, kids from wealthier families have a better chance of obtaining a high school education.

The came the data showing the probability of a kid, who has dropped out, obtaining a GED:

This is a tale that is counter-intuitive.  We expect the narrative to be that rich kids do better than poor kids.  But this data shows the opposite for folks who obtain a GED after dropping out of school.

Finally we show data that speak to college degrees.  College is, arguably, a key factor to the success of an individual in today’s society.  Maybe.

The data suggests a massive SES impact.  Very few kids from the poorest families are graduating college while nearly 40% of the wealthiest kids are achieving that milestone.

The data is somewhat mixed.  High school and college graduation rates seem highly dependent on the SES of the parents while attainment of a GED is the exact opposite.

Now, what if we add in the predictive value of IQ?

First, dropping out of school:

The first thing that should be apparent is that dropping out of school is rare for kids of either average SES or intelligence.  But dropout rates escalate dramatically for those of below average intelligence.  IQ is more than a 3x predictor than SES of the school dropout.

How does GED look?

The data including IQ doesn’t change the fact that obtaining a GED goes against the commonly held belief that kids from poorer households do worse than the rich kids.  Even accounting for IQ, the folks from the poorer families obtain a GED at higher rates than do kids from wealthier households.

Our last look into education is the college graduation rate:

Again, a dramatic difference.  With one exception; the data shows very little difference between low SES and low IQ.  But when it comes to highly intelligent kids, it doesn’t matter if they come from poorer families or wealthier families; the kids are graduating college at a better than 75% clip.

As with poverty, IQ plays a dominant role in the educational attainment of our children.  All else being equal, the smarter the kid, the better they will achieve educationally.