Tipping: When And How Much 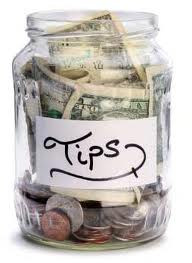 I do a fair amount of domestic moving about.  In fact, I just got back from a short trip this weekend.  And for awhile now I’ve been struck by how many occasions I’m called upon to tip.  And I’m just beside myself for feeling out of touch.

For much of my working life I’ve been supported by tips.  I bussed tables in college and then moved on to a banquet server.  Later I became a bartender during school and then, in Seattle, I earned my complete living as a bartender for 4+ years.  I consider myself “in tune” with the tip’ed population but admit to now being confused.

So, here are some times off the top of my head that call for tipping:

And I’m sure there’s more.

In many of these cases I’m not sure that tipping is warranted, in the others, I’m at a loss for how much to tip.  I just totally admit to not knowing.

This entry was posted in Life, Raising Men and tagged Tip, Tipping. Bookmark the permalink.

3 responses to “Tipping: When And How Much”