The Unrelenting March Of Progress 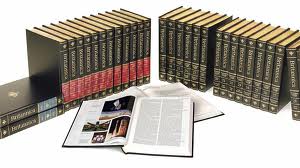 And another iconic institution fails; or fades.  The encyclopedia is now the way of the dinosaur.  It would appear that the times have caught up to the classic font of knowledge and given way to the internet.  Sadly, the Encyclopedia Britannica will no longer be printed:

The first Encyclopaedia Britannica was printed in 1768. And now, 244 years later, it has been printed for the last time. At least as a set of bound books.

Its publisher has announced that it will no longer be publishing the print version, and will stop selling it when current stock runs out.

A static collection of books that can’t be updated but by the purchase of a whole new set is fading away?

Now, to be fair, perhaps if the grand encyclopedia updated it’s marketing:

The digital option costs $70 a year, while the last printed version cost $1,400. Britannica has printed a new version of the reference books every two years;

$70 a year?  I can get the digital option every year for 20 years before I bump into the cost of the printed version.  That is, I can buy the printed version today and use it through 2032 OR I can pay 70 bucks a year and use that until 2032.

However, as Obama’s poll numbers are slipping in the face of a weakening recovery and higher gas prices, he is lamenting the fact that the end has finally come for the workers who print the encyclopedia:

And Obama’s not alone.  He has help from Chicago.  In fact, he holds Obama’s old seat:

It’s gotta be hard to be a democrat!

2 responses to “The Unrelenting March Of Progress”