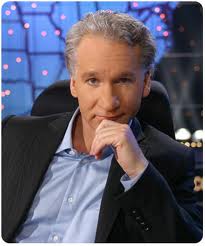 I posted earlier about the fact that liberals don’t expect themselves, themselves as an identified “group” to live up a certain level of values.  The individual and specific father of three 4 who teaches school and considers himself a devote Christian?  Does he have, and live by, values?  Sure.

Same for the soccer mom who volunteers at the hospital, organizes fund raisers for charities and contributes to others and considers herself a lifelong liberal?  Her?  Is she an example of a person living a “values-based” life?  Sure.

But it ends there.  As a group, there is no demand that values be important.

An example of someone living that value-based life would someone who speaks out against Rush to also speak out against Maher, even when, heck, ESPECIALLY when, the politics suggest you don’t.

Check out these two Democrat congresswomen and their statements condemning Bill Maher.  Via Say Anything.

If you’re outraged over Rush’s comments then you must be outraged over Maher’s.  And if you aren’t, then you have no values.  Or, at the very least, aren’t living up to ’em.