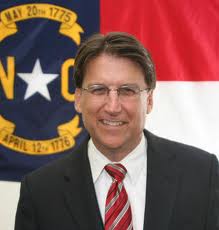 And when I say npopular, I mean UNpopular:

Her numbers are so low she’s isn’t even gonna try and run for her second term.  She bowed out leaving the race to a bunch of democrats that don’t carry much name recognition.

So, in a time when democrats from Florida to Ohio to Wisconsin feel they have the republicans on the ropes, North Carolina is about to deal a serious blow to the hopes they have of making significant in roads to the control of the states the republicans took in 2008:

Two polls put the early governor’s race in context. The left-leaning Public Policy Polling took a look at the primary races, but the conservative Civitas Institute looked ahead to November.

Civitas found Republican Pat McCrory holds a clear lead on his lesser-known Democratic challengers. The closest contest is McCrory vs. Bob Etheridge, a former congressman and superintendent of education. In a hypothetical matchup, McCrory takes 46 percent to Etheridge’s 32 percent.

The biggest democratic hope is the recall in Wisconsin.  But their chances there seem low and getting lower.  While unions may not be pleased with the legislation passed by Walker and the republicans, those changes are working and providing relief all through the state.