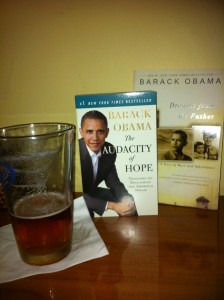 The story continues with a glimpse into a memory.  A memory of Barack in an American Embassy waiting for his mother to finish her meetings.  After he himself finished his homework and comics he began to explore the books in the library his mother had him wait in.  He came across a stack of Life magazines where he discovered a picture of a black man who had tried to bleach his skin white.

From this scene we are taken back 3 years, to a time when Barack the boy was 6 years old.  And clearly, the effect was meant to frame the chapter; Barack was black in a white world.

The fade begins with an abrupt introduction to Barack’s step-father; Lolo.  In the space of one sentence, the first sentence of the fade, we learn that Barack’s mother remarried, that her new husband was Indonesian and that he was a fellow student at the University of Hawaii.  The couple met when the child was only 4, the courtship lasted 2 years.

From here the book moves along well.  We are introduced into a very easy-going, confident, and able man.  We are given snippets of life for the young boy; playing with friends, running the streets, catching crickets and of how that boy adapted to the new society – language, culture and food.

As Barack grew up with this new man, we see that Lolo took him under his wing so to speak.  We see conversations about weakness and strength, we see how Lolo teaches the boy about hiring and firing servants.  We see boxing lessons and chicken slaughter.  We even hear of Lolo’s time in combat beautifully expressed when he was asked by Barack why he killed the enemy soldier.  “He was weak,” was the reply.  In many ways implicit and even explicit, Obama writes that he was learning about power.

As we near the end of the chapter we begin to transition into the dissolving of the marriage.  The couple grows further and further apart even as she acknowledges that these are not her people.  I got the feeling that they didn’t stop loving each other, rather, they fell OUT of love.  If you can do such a thing.

It’s here in the end of the chapter that we hear the story of Barack as a boy being roused by his mother at 4:30 in the morning. This was done because they couldn’t afford to send him to the International School with the rest of the American children.  And, as a compromise, his mother arranged for correspondence classes from America.  She clearly identified that Obama would be American.

Finally, as the stories of the hard “dad love” described through Lolo keep coming, Obama’s mother decides that they aren’t enough.  Rather than all of that she would her son learn values.  And those values that she cherishes are embodied in her first love, Barack the Elder.  More and more she would use the boy’s father, his life and struggles, to shape the vision of the man she wanted Barack to grow into.  And this vision was one of a black man.  He was surrounded with black history and black accomplishment.  She taught Obama that to be born black was to “be the beneficiary of a great inheritance.”

And the frame.  The chapter ends with Obama recounting his tale of the picture of the bleached black man.  And the shock that any black man would want to give up that inheritance only to become white.  It was a violent moment for the boy.  A moment that I suspect still shapes him today.