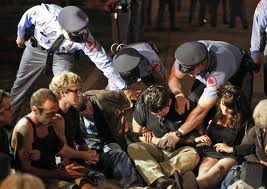 How quickly 100 days come and then go.  Occupy Raleigh has been downtown at our state’s capital since October 15th, 2011.  They’ve been fighting what some might call a noble fight.  The idea that the American Dream has been taken from us, or that t has been somehow diminished by a subset of people with incredible wealth.  At some level, that rings true; and is noble.

However, from a classic leftist playbook, the Occupy crowd continued to diminish it’s credibility while showing the world it is still nothing more than a fringe group of malcontents:

Raleigh, N.C. — Two Occupy Raleigh protesters were arrested Sunday as the movement marked the 100th day since it began in October.

The group held a march around the State Capitol called “100 Reasons to Demonstrate.”

Two men were taken into custody after they refused to get out of Fayetteville Street, police said. Nicholas Alan Warren Johnson, 25, and John Christopher Pearson, 33, were both charged with impeding the flow of traffic.

March.  Demonstrate.  Say what needs to be said.  But let the world go about its business for the sake of all that’s holy.

There is simply no reason to walk in traffic just to be an ass.