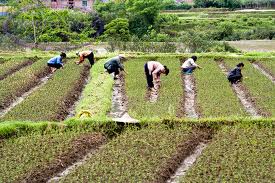 This story tells you:

Everyone worked on the village’s collective farm; there was no personal property.

“Back then, even one straw belonged to the group,” says Yen Jingchang, who was a farmer in Xiaogang in 1978. “No one owned anything.”

At one meeting with communist party officials, a farmer asked: “What about the teeth in my head? Do I own those?” Answer: No. Your teeth belong to the collective.

In theory, the government would take what the collective grew, and would also distribute food to each family. There was no incentive to work hard — to go out to the fields early, to put in extra effort, Yen Jingchang says.

“Work hard, don’t work hard — everyone gets the same,” he says. “So people don’t want to work.”

In Communist China, the state owned everything.  It didn’t matter what was produced or how hard an individual worked.  Mr Jingchang sums it up:  “Work hard, don’t work hard — everyone gets the same,”

And what changed the world for Mr Jingchang?

In 1978, the farmers in a small Chinese village called Xiaogang gathered in a mud hut to sign a secret contract. They thought it might get them executed. Instead, it wound up transforming China’s economy in ways that are still reverberating today.

A contract.  A contract that guaranteed property:

In Xiaogang there was never enough food, and the farmers often had to go to other villages to beg. Their children were going hungry. They were desperate.

So, in the winter of 1978, after another terrible harvest, they came up with an idea: Rather than farm as a collective, each family would get to farm its own plot of land. If a family grew a lot of food, that family could keep some of the harvest.

The farmers agreed to divide up the land among the families. Each family agreed to turn over some of what they grew to the government, and to the collective. And, crucially, the farmers agreed that families that grew enough food would get to keep some for themselves.

The contract also recognized the risks the farmers were taking. If any of the farmers were sent to prison or executed, it said, the others in the group would care for their children until age 18.

The farmers tried to keep the contract secret — Yen Hongchang hid it inside a piece of bamboo in the roof of his house — but when they returned to the fields, everything was different.

“We all secretly competed,” says Yen Jingchang. “Everyone wanted to produce more than the next person.”

It was the same land, the same tools and the same people. Yet just by changing the economic rules — by saying, you get to keep some of what you grow — everything changed.

At the end of the season, they had an enormous harvest: more, Yen Hongchang says, than in the previous five years combined.

Nothing changed.  Nothing, that is, except incentive.

The poor dirt farmers now had incentive; they got to keep what was theirs.  And the result was 5x the normal harvest.

This entry was posted in Economics, Liberty and tagged Capitalism, Communism, GINI. Bookmark the permalink.