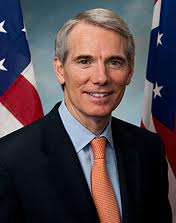 This entry was posted in Liberty, Republicans Can Be Leftists Too and tagged Gay Marriage, Gay Rights, Ohio, Rob Portman. Bookmark the permalink.